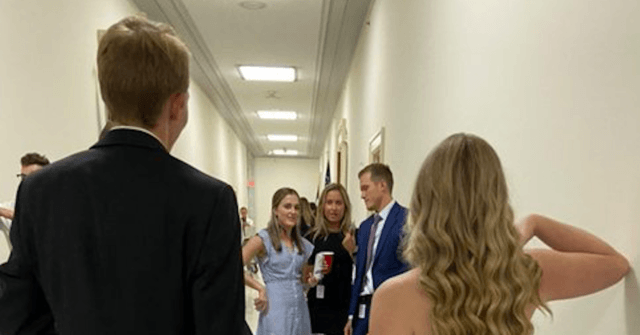 As Breitbart News reported Thursday, Pelosi ordered Capitol Police to arrest any staff and visitors who refused to comply with new mask mandates, which she imposed earlier in the week, regardless of vaccination status. She ordered the Capitol Police to report members of Congress who refused to comply to the House Sergeant at Arms for disciplinary action.

In response, several GOP members of Congress defied Pelosi’s orders by allowing staff to work without masks, or remotely.

But young Capitol Hill staffers had another idea: they brought out drinks, inflated a rubber duck, and let the good times roll.

That caught the attention of Aaron Fritschner, a staffer for Rep. Don Beyer (D-VA), who sought to shame them on Twitter:

Hard to show the full scope because it’s a tight space and there are a bunch of people, but it’s about a hundred staff crammed together in a narrow hallway on second floor of Rayburn, almost all unmasked. They’re playing water pong, they have corn hole, I even smelled a cigar. pic.twitter.com/g2Q68SUVFs

If you are wondering who these staff work for the nearby rooms include Reps. Tom Cole (OK), Pete Sessions (TX), John Carter (TX), Morgan Griffith (VA), Ken Calvert (CA), and Elise Stefanik (NY).

1) There is *no* chance these people will clean this up. They will leave it for the custodial staff.

2) There are Dem offices on that hall too, with staffers who have to walk through this go home.

Aerosolized virus can remain in the air for up to 3 hours.

Republican members of the House staged a maskless protest on the Senate side of the Capitol, where the leadership does not enforce mask mandates, though both chambers are under Democratic control and both claim to be following “the science.”

Also on Thursday, President Joe Biden announced that he would be requiring all federal employees, and employees of federal contractors, to attest to having been vaccinated, or wear a mask and submit to regular testing for the coronavirus.