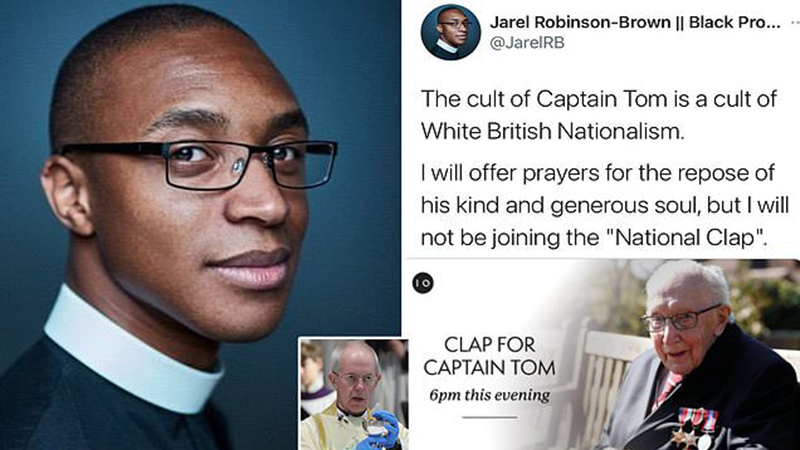 A Church of England Reverand has been blasted on social media after he claimed that an organised ‘national clap’ in commemoration of a recently deceased World War Two veteran constitutes a ‘cult of white British nationalism’.

The show of appreciation was organised for Captain Sir Tom Moore, who died aged 100 after raising £33 million pounds for the NHS in the UK.

London based Reverend Jarel Robinson-Brown didn’t share in the sentiment, however, and declared that those clapping, which included Captain Moore’s family, are white supremacists.

“The cult of Captain Tom is a cult of White British Nationalism. I will offer prayers for the repose of his kind and generous soul, but I will not be joining the ‘National Clap’,” Robinson-Brown bizarrely tweeted:

After a massive backlash ensued, Robinson-Brown deleted the tweet and stated “I offer an unreserved apology for the insensitive timing and content of my tweet regarding the clap for Captain Tom.”

In his Twitter bio, prior to its deletion, Robinson-Brown, who is training to be a priest, described himself as an ‘activist’ who is “passionate about issues of justice, particularly in the areas of race and sexuality” and has “an interest in gender, desire and ethnicity in Late Antique Egypt”, as well as “liberation theology” and “queer theology”.

Many responding to the tweet noted that some of those ‘interests’ generally always seem to come along with virulent nastiness.

This man is a bigot & should not be a representative of the Church or anything else for that matter.

Church of England : Remove Jarel Robinson-Brown from his post at C of E for insulting Sir Captain Tom's cause – Sign the Petition! https://t.co/ShCnYmws8V via @UKChange

@churchofengland what a disgrace Jarel Robinson-Brown is expressing such vile views based on colour in relation to Sir Capt Tom. I will await your announcement on what action you will be taking against him.

Jarel Robinson-Brown's race-baiting is typical of people who do much to set back race relations – something the likes of Jesse Jackson and Al Sharpton have been doing for years in the USA. https://t.co/2SsYafWhSa

Racism from a preacher. pic.twitter.com/Tvux3xbblb

Will Kings College London @KingsCollegeLon please state clearly that it will take immediate and appropriate action against Jarel Robinson-Brown for his crass, racist and ill conceived tweet about Captain Sir Tom Moore.
Sir Tom, The country and KLC deserves so much better. https://t.co/Qaa1uiAcgf

A petition has been created calling for the removal of Robinson-Brown from his post as curate of All Hallows in the City of London:

I have just signed this.. Church of England : Remove Jarel Robinson-Brown from his post at C of E for insulting Sir Captain Tom's cause – Sign the Petition! https://t.co/nqhfAhjEAB via @UKChange

Others noted that had the race connotations been reversed, this guy would have immediately been removed from his post:

In a tweet the Rev. Jarel Robinson-Brown, curate of All Hallows in the City of London, said; " The cult of Sir Tom is a cult of White British Nationalism." He later apologised. Had that been a white priest talking about a black hero he would have been fired/suspended.So….. pic.twitter.com/80w7uHcsMP

Church of England clergyman Jarel Robinson-Brown tweeted: "The cult of Captain Tom is a cult of White British Nationalism” before issuing an apology https://t.co/WeRxUM8BRY