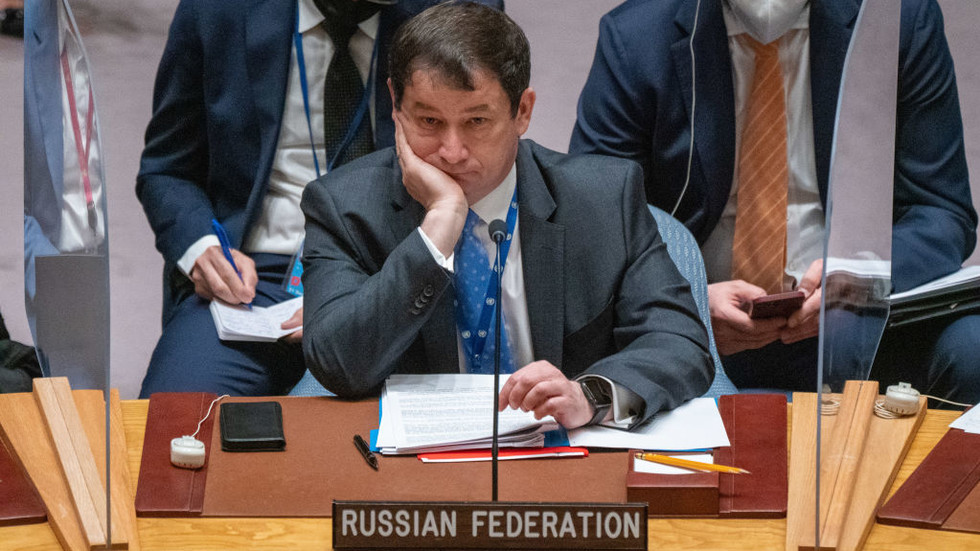 Russia does not target civilians in Ukraine and did not strike a shopping center in Kremenchug, Moscow’s envoy to the UN told the Security Council on Tuesday.

Ambassador Dmitry Polyanskiy said the mall caught fire due to an explosion of Western-supplied weapons and ammunition, stored at the nearby factory and intended to used in shelling civilians in the Donbass, making it a legitimate military target.

He also criticized the UNSC for breaching protocol and allowing Ukrainian President Volodymyr Zelensky to address the council via video-link, after refusing such a request from the Central African Republic.

“In reality, there was no strike on the mall,” Polyanskiy told the council, as Russia targeted a storage facility at the Kredmash factory next door. The weapons and ammunition stored there were bound for the front, where Ukrainian artillery has been bombarding the civilians of Donbass, for many years, to no objection from the UN, he added. “The Russian strike stopped that.”

Polyanskiy pointed out that Ukrainian media clearly shows images of intact merchandise inside the Amstor shopping center, and windows of nearby residential buildings that had not shattered. The fire was caused by explosions of the Western-supplied ammunition at Kredmash, he said.

Moscow’s envoy accused Ukraine of waging a propaganda war, using fakes and lies such as the ‘Snake Island 13’ and the ‘Ghost of Kiev’ to campaign for more weapons and financial aid from the West. Actual testimonials of civilians from Donbass show that they blame only the Ukrainian military, which deploys around residential homes and uses civilians as human shields, Polyanskiy argued.

Tuesday’s session was convened by Albania, a NATO member state which chairs the UNSC through the end of June.

It was opened by Rosemary DiCarlo, a US diplomat currently serving as UN under-secretary-general for political and peacebuilding affairs. She said that entire cities in Ukraine were being “leveled” by the Russian military and described Monday’s incident in Kremenchug as “one of the most shocking attacks of the conflict.”

The keynote speaker, however, was Zelensky. Appearing via video-link – in what Polyanskiy objected to as a breach of protocol – the Ukrainian president once again demanded that the UN declare Russia a “terrorist state,” expel it from the Security Council and the General Assembly, and set up an international tribunal, as had been done for the Rwandan genocide.

“Deprive the terrorist state of its powers!” he told the council.

Zelensky accused Russia of waging a “full-scale war of conquest” against Ukraine and being a “terrorist and enemy of humanity.” Russia only has a permanent seat in the UNSC due to the “shortsightedness” of the West at the end of the Cold War, he insisted, and ought to be expelled from the UN outright.

Representatives of Poland, Estonia, and the UK voiced support for Kiev. Polyanskiy insisted that Russia launched its military operation to prevent Ukraine from becoming an anti-Russian weapon in the hands of the West.

“Until these goals are achieved, our operation will continue,” the Russian envoy said.