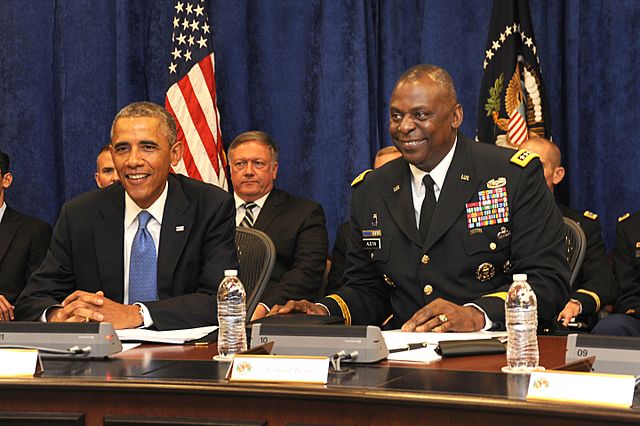 On December 4, 2022, AP news reported that the Secretary of Defense, Lloyd Austin, is refusing to consider rescinding the Covid-19 vaccine mandate.  In recent days, Republicans in Congress and the Senate have pushed back on the mandate, citing harm it has done to recruiting and retention in the military.  Worse, the military has fallen short of recruiting goals by the tune of tens of thousands.  Republicans have threatened to hold the passage of the Defense spending bill until the White House directs the vaccine to be ended.  White House spokespersons said the Commander in Chief was considering the issue.

SECDEF, Austin, however, has doubled down on the vaccine mandate.  ““I’m the guy” who ordered the military to require the vaccine, Austin added.  “I support continuation of vaccinating the troops.””  Austin triumphantly declared that “A million people died in the United States of America.  We lost hundreds in DoD.  So, this mandate has kept people healthy.”

Austin, a 1975 graduate of the United States Military Academy, has strayed far from his ethical roots.  To date, 96 active-duty deaths have been attributed to Covid-19 since the pandemic began.  This figure has not changed in the past 4 months.   Less than 10 have died of Covid in the past year.  The vast majority of deaths in the  690 figure he likely refers to includes contractors, dependents, and civilian DoD employees.  According to the CDC, less that 0.3% of covid deaths have occurred in Americans 24 and under.   The average age of US military servicemembers is 23.  The DoD has repeatedly made covid statistics by age and comorbidity unavailable, likely to mask the truth that nearly all of the 96 deaths that did occur were in personnel with multiple co-morbidities and that were way over 24 years of age…