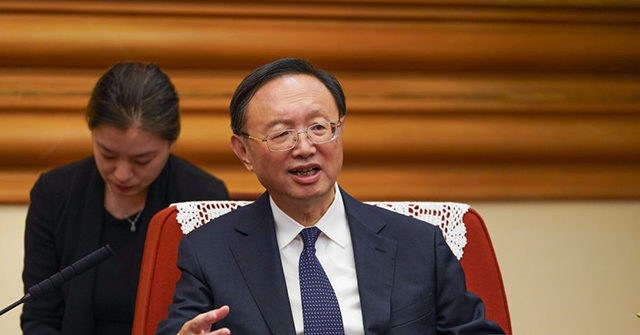 Yang drew a “red line that must not be crossed” against U.S interference in Taiwan, Hong Kong, Tibet, or Xinjiang province.

“For the past few years, the Trump administration adopted misguided policies against China, plunging the relationship into its most difficult period since the establishment of diplomatic ties,” Yang told a virtual forum hosted by the New York-based National Committee on U.S.-China Relations.

“I hope the new administration will remove the stumbling blocks to people-to-people exchanges, like harassing Chinese students, restricting Chinese media outlets, shutting down Confucius Institutes and suppressing Chinese companies. These policy measures are not only wrong but also unpopular,” Yang said.

“We in China hope that the United States will rise above the outdated mentality of zero-sum, major-power rivalry and work with China to keep the relationship on the right track,” he declared.

Yang added a warning that China’s crackdown on democracy in Hong Kong, its growing aggression toward Taiwan, its brutal occupation of Tibet, and its vicious oppression of the Uyghur Muslims in Xinjiang province are on the far side of a “red line that must not be crossed,” thus signaling total rejection of the human rights concerns expressed by the United States, other Western powers, and human rights groups.

“We in China hope that the U.S. side will fully understand the sensitivity of these issues and handle them with prudence, so as to avoid disruption or damage to mutual trust and cooperation,” he said.

Yang insisted that the ruling Communist Party has the “wholehearted support” of the Chinese people, contradicting the Trump administration’s portrayal of the Chinese as frightened captives of a harsh dictatorship.

The South China Morning Post described Yang as “the highest-ranking official so far to comment on the bilateral relationship since Biden’s inauguration nearly two weeks ago.”

“Yang’s message to the U.S. was consistent with a view in Beijing that the U.S.’s erratic policies were being driven by deepening fissures in American society, rather than its own policies. Chinese diplomats in recent weeks have repeatedly dismissed Trump’s actions as ‘madness,’ laying the blame for the deterioration in ties at Washington’s feet,” Bloomberg News observed.