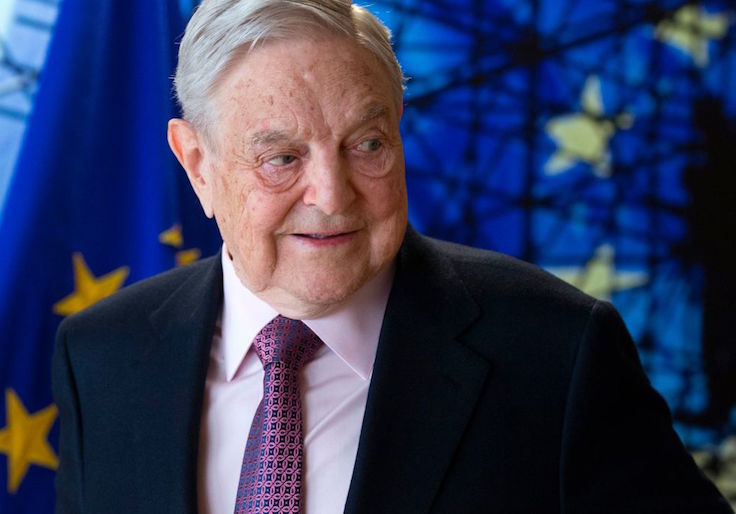 Demand Justice took in $2.6M from Soros nonprofit in 2018

A “dark money” group that was established to push back against the judicial nominations of President Donald Trump, and which was at the forefront of the battle against Justice Brett Kavanaugh and continues to go after him to this day, was heavily financed by liberal billionaire George Soros around the time of its inception, grants show.

Demand Justice, a left-wing advocacy group, was established in 2018 and is led by Brian Fallon, the former press secretary for Hillary Clinton’s failed 2016 campaign. The group does not disclose its donors and is a project of the Sixteen Thirty Fund, which falls under the umbrella of Arabella Advisors—an intricate dark money network containing dozens of liberal groups and projects. The network is used as a “pass through” entity for Democratic donors and has facilitated $1.6 billion in funds to liberal entities in recent years.

Due to Demand Justice’s arrangement with the Sixteen Thirty Fund, which acts as its fiscal sponsor, it does not have to file annual tax forms to the Internal Revenue Service. Those who contribute to groups housed at the Sixteen Thirty Fund can also mark the money to the fund’s name, where it is passed to the intended groups while ultimately masking the destination.

However, the Open Society Policy Center, Soros’s 501(c)(4) D.C.-based advocacy group, outright marked that it had sent $2.5 million to Demand Justice for general support between April 1 and June 30, 2018, according to a review of its grants. Soros’s group sent $87,000 more to Fallon’s group between Oct. 1 and Dec. 31 to “support advocacy on judicial nominations.”

The initial grant from Soros’s policy center, which is an affiliated entity to the Open Society Foundations, was given to Fallon’s group around the time that the former Clinton henchman appeared at a secretive gathering of the Democracy Alliance, the left’s largest donor club that was co-founded by Soros, in Atlanta. The Washington Free Beacon was present at the gathering and spotted Fallon at the bar. The Free Beacon also obtained documents showing that Fallon was there on behalf of Demand Justice, which was not publicly launched at the time.

Soros’s policy center sent $1.3 million more to the Sixteen Thirty Fund during the second quarter of 2017. Those funds are not marked toward any particular group, but instead are reported as supporting advocacy on executive nominations, policy advocacy on social safety net programs, and cross-sector policy advocacy and planning.

Published in Dark Money, Political News and US News