‘Stay away!’ Iran’s President Rouhani issues chilling warning to the West to keep out of the Gulf as he parades nation’s military hardware – including missiles which could reach US bases – after America sent reinforcements to the region 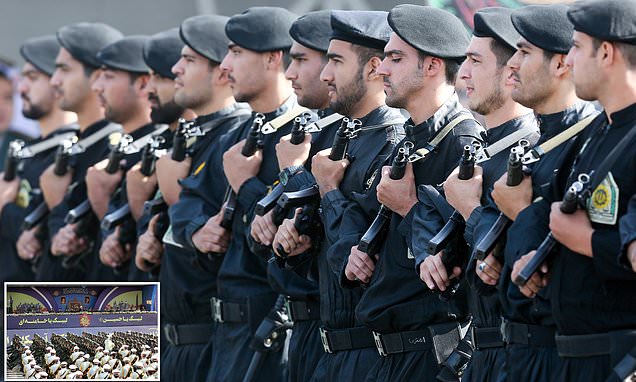 Iran issues chilling warning to the west while showing military might

Iran‘s president has warned the West to ‘stay away’ while showing his country’s strength during a military parade.

President Hassan Rouhani denounced the presence of foreign forces in the Gulf and said Iran will put forward a peace plan, after arch-foe the United States ordered reinforcements to the region.

His speech came as he and top military brass saluted row after row of soldiers marching past them in tight unison in front of the shrine of Ayatollah Khomeini in Tehran today.

The parade showcased tanks, armoured vehicles, drones and missiles – including the Khorramshahr which is said to have a range of 2,000 kilometres (more than 1,200 miles).

In his speech, Rouhani called on the foreign powers to ‘stay away’ from the Gulf and said that if they’re ‘sincere, then they should not make our region the site of an arms race. Your presence has always brought pain and misery.’

He added: ‘The farther you keep yourselves from our region and our nations, the more security there will be.’