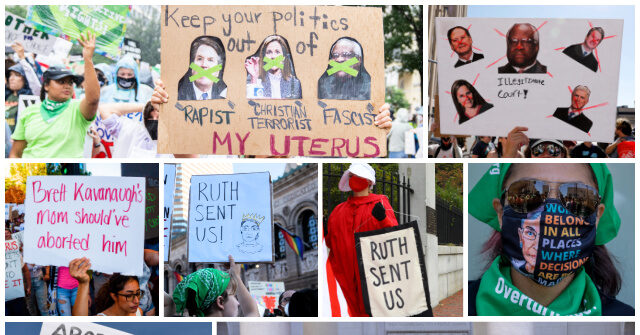 The pro-abortion activists behind the group "Ruth Sent Us" have largely remained anonymous, despite the…

Since the leak of Justice Samuel Alito’s draft majority opinion in the Dobbs v. Jackson Women’s Health Organization case that eventually led to the overturning of Roe v. Wade, America has endured a “Summer of Rage.” The wave of demonstrations saw protesters going far beyond simply donning “Handmaid’s Tale” bonnets and gathering around the Supreme Court. There have been dozens of acts of violence, destruction, and harassment aimed at intimidating anti-abortion Christians and conservatives. In this series of articles, we will identify key players, organizations, and locations in this radical movement. We will also explain elements of the interconnected system that provides organizational and/or financial support for this radical agenda.

Read the other articles in this series:

One group of pro-abortion activists that has risen to prominence during the “Summer of Rage” is “Ruth Sent Us”; the name is an apparent homage to former Supreme Court justice and abortion industry ally Ruth Bader Ginsburg. The organizers of the group have largely remained anonymous.

Ruth Sent Us garnered national attention after publishing the supposed location of the homes (via a Google map) of the six centrist and originalist Supreme Court justices to their website, ruthsent.us. This led to (illegal) protests targeting justices at their homes. In June, a man was arrested outside Justice Brett Kavanaugh’s home and charged with attempted murder.