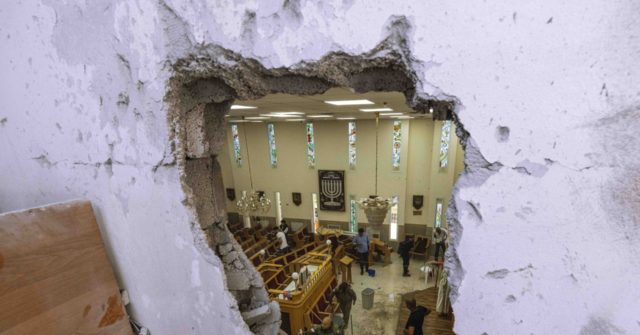 A synagogue in the Israeli coastal city of Ashkelon that was hit Sunday by a rocket fired by Palestinian Hamas terrorists was cleaned up and ready two hours later for the start of the Jewish holiday of Shavuot.

Shavuot, or Pentecost, commemorates the giving of the Torah on Mount Sinai. It is one of the most important holidays of the year, and was traditionally a time of pilgrimage to Jerusalem in ancient Israel.

Earlier in the day, a rocket — one of the few not intercepted by Israel’s Iron Dome missile defense system — burst through the walls of the sanctuary.

The Times of Israel reported:

Barely two hours after a rocket fired from Gaza smashed into an Ashkelon synagogue on Sunday, punching a hole in the wall and spreading debris through the building, locals had cleaned up the damage and pronounced the place of worship ready for use in time for Sunday evening’s opening prayers of the Shavuot festival.

Chunks of rocket had been removed from the Yad Michael synagogue building, and the battered interior cleaned up, with only the hole made by part of the rocket, high in the wall, remaining as gaping evidence of what had happened.

“Nobody is going to destroy our festival,” the synagogue’s cantor said.

Ashkelon, which is one of Israel’s southern cities, is often the target of rockets from Gaza.

Israel has an informal practice of rebuilding quickly after terrorist attacks. The Café Hillel,  a Jerusalem eatery virtually destroyed by a Palestinian suicide bomber in 2003, was immediately rebuilt and open for business the next day.