Note: All Global Research articles are now accessible in 51 languages by activating the Translate Website Drop Down Menu on the top banner of our home page.

This E-book consists of a Preface and Ten Chapters.

We are dealing with an exceedingly complex process.

In the course of the last 20 months starting in early January 2020, I have analyzed almost on a daily basis the timeline and evolution of the Covid crisis. From the very outset in January 2020, people were led to believe and accept the existence of a rapidly progressing and dangerous epidemic.

I suggest you first read the Highlights (below), the Preface and Introduction before proceeding with chapters II through X.

Alternatively you may wish to View the Global Research Video entitled: The 2021 Worldwide Corona Crisis(released in February 2021), which provides a 25 minutes summary.

Each of the ten chapters provides factual information as well as analysis on the following topics:

What Is Covid-19, what is SARS-CoV-2, how Is it identified, how is it estimated?

The timeline and historical evolution of the Corona Crisis,

The devastating economic and financial impacts,

The enrichment of a social minority of billionaires,

How the lockdown policies trigger unemployment and mass poverty Worldwide,

The devastating impacts on mental health.

The E-book includes analysis of curative and preventive drugs as well as a review of Big Pharma’s Covid-19 “messenger” mRNA vaccine which is an “unapproved” and “experimental” drug affecting the human genome. (It is a dangerous drug. See Chapter VIII)

Also analyzed are issues pertaining to the derogation of fundamental human rights, censorship of medical doctors, freedom of expression and the protest movement.

The last chapter focusses on the unfolding global debt crisis, the destabilization of national governments, the threats to democracy including “global governance” and the World Economic Forum’s “Great Reset” proposal.

Since its publication in mid-December 2020, the E-Book has been consulted by more than 300,000 readers.

We are at the crossroads of one of the most serious crises in World history. We are living history, yet our understanding of the sequence of events since January 2020 has been blurred.

Worldwide, people have been misled both by their governments and the media as to the causes and devastating consequences of the Covid-19 “pandemic”.

The unspoken truth is that the novel coronavirus provides a pretext and a justification to powerful financial interests and corrupt politicians to precipitate the entire World into a spiral of mass unemployment, bankruptcy, extreme poverty and despair.

More than 7 billion people Worldwide are directly or indirectly affected by the corona crisis.

The COVID-19 public health “emergency” under WHO auspices was presented to public opinion as a means (“solution”) to containing the “killer virus”.

If the public had been informed and reassured that Covid is  (according to the WHO definition) “Similar to Seasonal Influenza”, the fear campaign would have fallen flat. The lockdown and closure of the national economy would have been rejected outright.

The first stage of this crisis (outside China) was launched by the WHO on January 30th 2020 at a time when there were 5  cases in the US, 3 in Canada, 4 in France, 4 in Germany.

Do these numbers justify the declaration of a Worldwide public health emergency?

The fear campaign was sustained by political statements and media disinformation.

People are frightened. They are encouraged to do the PCR test, which is flawed. A positive PCR test does not mean that you are infected and/or that you can transmit the virus.

The RT-PCR Test is known to produce a high percentage of false positives. Moreover, it does not identify the virus.

From the outset in January 2020, there was no “scientific basis” to justify the launching of a Worldwide public health emergency.

In February, the Covid crisis was accompanied by a major crash of financial markets. There is evidence of financial fraud.

And on March 11, 2020: the WHO officially declared a Worldwide pandemic at a time when there were  44,279 cases and 1440 deaths outside China out of a population of 6.4 billion (Estimates of confirmed cases based on the PCR test)..

Immediately following the March 11, 2020 WHO announcement, confinement and lockdown instructions were transmitted to 193 member states of the United Nations.

Unprecedented in history, applied almost simultaneously in a large of number countries, entire sectors of the World economy have been destabilized. Small and medium sized enterprises have been driven into bankruptcy. Unemployment and poverty are rampant.

The social impacts of these measures are not only devastating, they are ongoing under what is described as “A Second Wave”.  There is no evidence of a “Second Wave”. Amply documented the PCR estimates are flawed.

The health impacts (mortality, morbidity) resulting from the closing down of national economies far surpass those attributed to Covid-19.

Famines have erupted in at least 25 developing countries according to UN sources.

The mental health of millions of people Worldwide has been affected as a result of the lockdown, social distancing, job losses, bankruptcies, mass poverty and despair. The frequency of suicides and drug addiction has increased Worldwide.

“V the Virus” is said to be responsible for the wave of bankruptcies and unemployment. That’s a lie. There is no causal relationship between the (microscopic) SARS-2 virus and economic variables.

It’s the powerful financiers and billionaires who are behind this project which has contributed to the destabilization (Worldwide) of the real economy. And there is ample evidence that the decision to close down a national economy (resulting in poverty and unemployment) will inevitably have an impact on patterns of morbidity and mortality.

Since early February 2020, the Super Rich have cashed in on billions of dollars.

Amply documented it’s the largest redistribution of global wealth in World history, accompanied by a process of Worldwide impoverishment. 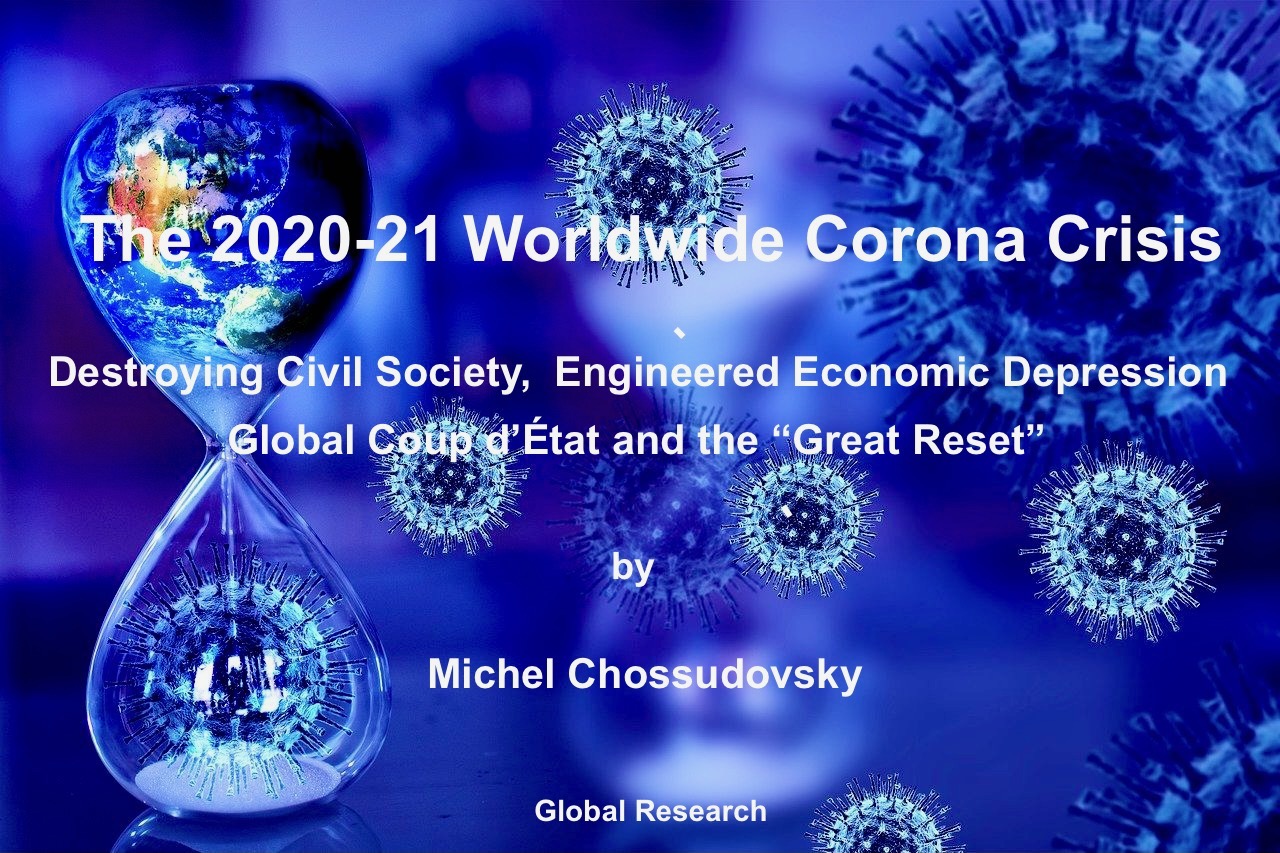 The fear campaign has served as an instrument of disinformation.

Media lies sustained the image of a killer virus which initially contributed to destabilizing US-China trade and disrupting air travel. And then in February “V- the Virus” (which incidentally is similar to seasonal influenza) was held responsible for triggering the most serious financial crisis in World history.

And then on March 11, 2020 a lockdown was imposed on 193 member states on the United Nations, leading to the “closure” of national economies Worldwide.

Starting in October 2020,  a “second wave” was announced. “The pandemic is not over”.

The fear campaign prevails. And people are now led to believe that the corona vaccine sponsored by their governments is the “solution”. And that “normality” will  be restored once the entire population of the planet has been vaccinated.

How is it that a vaccine for the SARS-CoV-2 virus, which under normal conditions would take years to develop, was promptly launched in early November 2020?  The mRNA vaccine announced by Pfizer is based on an experimental gene editing mRNA technology which has a bearing on the human genome.

Or did Pfizer “go straight to human “guinea pigs.”? Human tests began in late July and early August. “Three months is unheard of for testing a new vaccine. Several years is the norm.”

Our thanks to Large and JIPÉM

This caricature by Large + JIPÉM  explains our predicament:

Mouse No 1: “Are You Going to get Vaccinated”,

Mouse No. 2: Are You Crazy, They Haven’t finished the Tests on Humans”

And why do we need a vaccine for Covid-19 when both the WHO and the US Center for Disease Control and Prevention (CDC) have confirmed unequivocally that Covid-19 is  “similar to seasonal influenza”.

The plan to develop a vaccine is profit driven. It is supported by corrupt governments serving the interests of Big Pharma. The US government had already ordered 100 million doses back in July and the EU is to purchase 300 million doses. It’s Big Money for Big Pharma, generous payoffs to corrupt politicians, at the expense of tax payers.

In the following chapters, we define the SARS-CoV-2 virus and the controversial RT-PCR test which is allegedly being used to “identify genetic fragments of the virus” as well establish the “estimates” of the so-called “positive cases”.(Chapter III)

In Chapter II, we examine in detail the timeline of events since October 2019 leading up to the historic March 11, 2020 lockdown and confinement.

We assess the broad economic and social consequences of this crisis including the process of Worldwide impoverishment and redistribution of  wealth in favor of the Super Rich billionaires.(Chapter IV and V).

The devastating impacts of the lockdown policies on mental health are examined in Chapter VI.

Big Pharma’s vaccination programme which is being imposed on millions of people Worldwide is reviewed in Chapter VIII.

Chapter X concludes with an analysis of the World Economic Forum’s proposed “Great Reset” which if adopted would consist in scrapping the Welfare State and imposing massive austerity measures on an impoverished population.

This E-Book is preliminary. There is a sense of urgency. People Worldwide are being lied to by their governments.

A word on the methodology: our objective is to refute the “Big Lie” through careful analysis consisting of:

Our objective is to inform people Worldwide and refute the official narrative which has been used as a pretext and justification to destabilize the economic and social fabric of entire countries.

This crisis affects humanity in its entirety: 7.9 billion people. We stand in solidarity with our fellow human beings Worldwide. Truth is a powerful instrument.

I remain indebted to our readers, our authors and the Global Research team.

Spread the word. Please forward this text to friends and colleagues.

Click here to continue reading this article and the book.