The Day the Petty Tyranny of Nancy Pelosi Was Brought Down 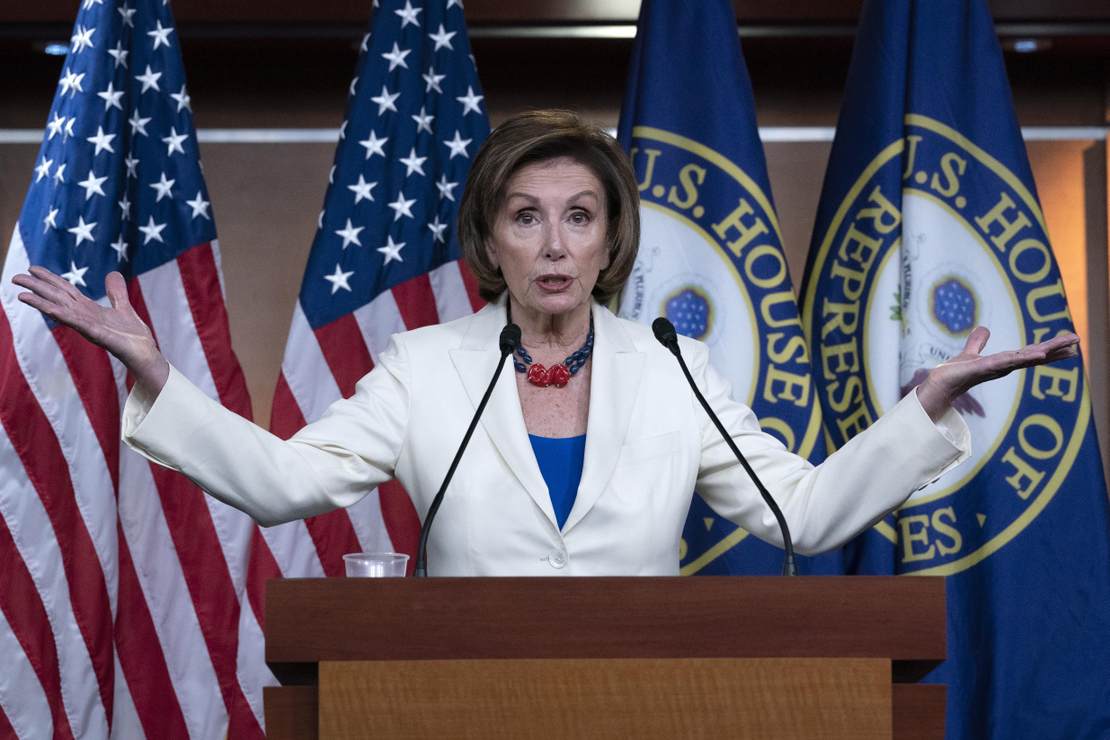 The Day the Petty Tyranny of Nancy Pelosi Was Brought Down

It was the last thing anybody in the congressional press galleries expected to happen. And…

It was the last thing anybody in the congressional press galleries expected to happen. And no wonder, since few of them could even dimly grasp why House Republicans talked a lot about “individual liberty” and “limited government.” Archaic concepts meant to cement white supremacy, right?

It happened in the morning as a few Democrats milled about the podium while others delivered “one -minute speeches,” meaningless statements solely for the benefit of the TV cameras.

Rep. Jamie Raskin (D-MD) was in the chair as the presiding officer. Speaker of the House Nancy Pelosi (D-CA), surrounded by nervous aides and a troop of corporate lobbyists, stood in the Speaker’s Lobby barking orders. All were masked, with Pelosi’s a stylish designer piece that matched perfectly with her regal outfit that obviously did not come from a rack at TJ Maxx.

Curiously, there were no Republicans on the floor. They had no caucus meetings scheduled and Pelosi’s Rules Committee had delivered three major bills for votes that afternoon. With 217 Democrats routinely voting in lockstep as decreed by Pelosi, the GOP minority had little hope of winning any of the votes, so nobody much cared that none were in the chamber.

And then suddenly there were Republicans everywhere. In the space of about five minutes, the entire House GOP delegation — minus Representatives Liz Cheney of Wyoming, Adam Kinzinger of Illinois, and eight others — had entered the chamber, all wearing masks just as Pelosi ordered, under threat of costly fines. It was almost as if they had stealthily coordinated their arrivals.

In fact, that is exactly what they had done unbeknownst to anybody outside of their ranks. Apparently, House Minority Leader Kevin McCarthy (D-CA) had taken advantage of the fortuitous fact that the missing representatives were at the Washington Post giving interviews about their votes to impeach former President Donald Trump. Cheney and Kinzinger proudly wore masks autographed by Pelosi.

The GOPers on the floor were solemn and quiet, so much so that it was almost eerie. The normally bombastic Raskin was instead puzzled and hastily dispatched an aide to tell Pelosi something was up. “Handle it yourself, I’m busy,” she told the aide to tell Raskin.

That just made Raskin more nervous, so he summoned House Judiciary Committee Chairman Jerrold Nadler (D-NY) to take the Speaker’s chair temporarily while the Marylander hustled to the Speaker’s Lobby to appeal directly to Pelosi to come to the floor. If anybody could figure out what the Republicans were up to, the “Master Legislator” could do it.

He also told floor aides to summon as many Democrats to the chamber as quickly as possible. That was exactly what McCarthy wanted Raskin to do. Alerted by friendly Democratic staffers, a platoon of journos also began filing into the galleries overlooking the floor.

In the Speaker’s Lobby, Raskin insisted to Pelosi that he had a bad feeling about the situation. “I think you should be in there, Madame Speaker, because your presence will intimidate them, give them second thoughts,” he told Pelosi.

Clearly perturbed at her underling’s inability to cope with the latest Republican antics, Pelosi brusquely handed a thick file with scheduling lists for members’ compulsory campaign fund-raising calls back to an aide and led Raskin, whose face by now seemed drained of color, back out to the House chamber.

She entered the chamber, surveyed the throng of masked Republicans sitting silently and staring back at her, and then mounted the podium. House Administration Committee Chairman Zoe Lofgren, another California Democrat, was in the middle of a one-minute speech. When she looked up and saw the speaker, she instantly became quiet.

“Would the minority leader care to explain to the House the purpose of this gathering at a time when no vote is being taken and no debate has been authorized,” Pelosi gruffly said to McCarthy, who had by this time stationed himself at the front of Republican side of the chamber’s seating.

“On behalf of the American people, we duly elected and constitutionally faithful Republicans of the House of Representatives have a message for you, Madame Speaker.” McCarthy paused for a few seconds to let his words settle in the ears of those in the chamber and galleries, as well as the C-SPAN audience that had no idea what was about the occur.

The clock had clicked a few more moments when, in unison, every Republican representative stood up, took off their masks and placed them on plates they had somehow managed to bring into the chamber, pulled out a lighter from their pockets and purses, and burned the cursed material.

“Madame Speaker, I offer a privileged motion to require you to …” McCarthy, now joined at the front by Rep. Steve Scalise of Louisiana and members of the House Freedom Caucus, began to speak.

That’s when I woke up, knowing that only in dreams do House Republicans ever find the courage to stand up and refuse to go along any longer with Pelosi’s endless abuses of power and prerogative, and limitless arrogance. Besides, this is 2021, not 1910.

Published in Pelosi, Political News and US News