The Middle East Is Draining Its Water Supply 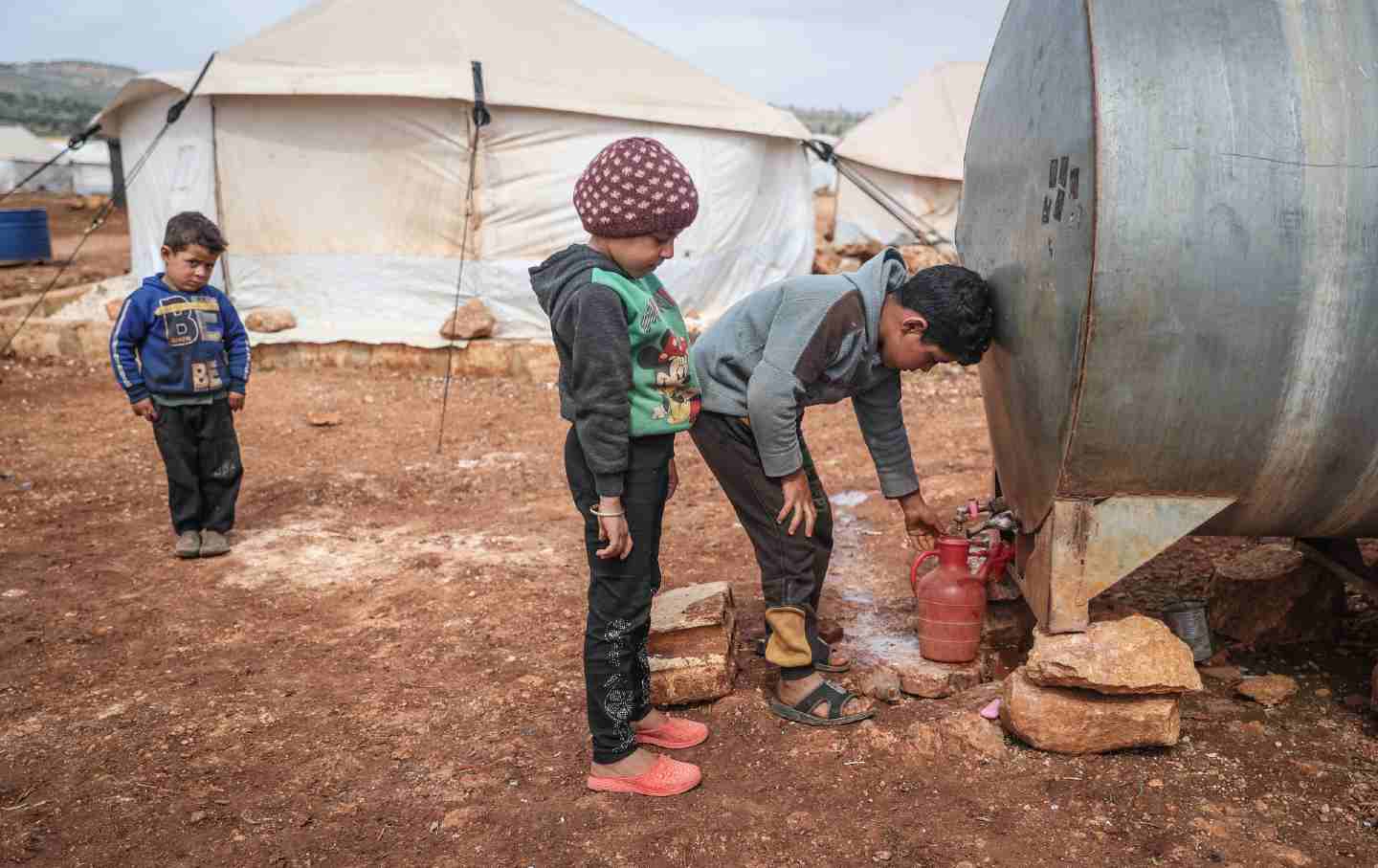 The Middle East Is Draining Its Water Supply

Drought and government action threaten the dozens of civilizations that have been nourished by these waters for millennia.

Syrian children draw from a water container at a refugee camp in the village of Kafr Aruq. (Photo by Anas Alkharboutli / Getty Images)

For millennia, dozens of civilizations and hundreds of millions of souls have been nourished by the waters of the Middle East—the Tigris and Euphrates rivers in the East, the Nile in the West, and the Sea of Galilee and the Jordan River flowing through its heart. Crops were grown, and fish were caught; people drank, bathed, and washed clothes; and the waters figured prominently in various religious texts. They were taken for granted, because they were always there and it was assumed they would always be there. But this is no longer the case.

A combination of climate change and unilateral initiatives by three of the region’s governments has dramatically lessened the supply of water. If these challenges are not addressed, the results will be devastating to the livelihood and survival of hundreds of millions of people and other living beings, and the resultant tensions have the potential to fuel even greater conflicts than we see at present.

It should be noted that the three unilateral actors are the non-Arab states of Turkey, Israel, and Ethiopia, while the affected populations also include the Arab peoples of Iraq, Syria, Jordan, Palestine, Egypt, and Sudan.

With rising temperatures and reduced rainfall, several Arab countries have already experienced a severe drought—the worst in 900 years. These climate changes have resulted in increased evaporation, lower water levels, and spreading desertification. The consequences can be seen not only in the drying up of once irrigated farmlands, and the dislocation and impoverishment of small farmers, but also in the increased intensity of dust storms, with effects felt as far away as the Arabian Peninsula.

There is also ample evidence that drought was one of the catalysts of the civil war in Syria. Several years of dangerously low levels of rain coupled with government mismanagement and lack of foresight resulted in hundreds of thousands of Syrian farmers’ being forced to leave their lands and flee to cities. The pressure that they and the influx of over a million Iraqi refugees created placed stress on resources, preparing the ground for civil strife and extremism, ultimately erupting into mass protests. The regime’s brutal response to this unrest only fueled the population’s anger at their dislocation and poverty.

Syria’s water problems were exacerbated by the Turkish dams on the Euphrates River, which reduced the flow of water into Syria by 40 percent.

Iraq—which has also experienced rising temperatures, lower levels of rainfall, and spreading desertification—has been even more dramatically impacted by the Turkish dams on both the Tigris and Euphrates rivers. It is estimated that Euphrates dams have resulted in an 80 percent decline in Iraq’s water supply. Much of Iraq’s date crops, once famous across the world, its citrus orchards, and rice fields have dried up. Iraq is losing an average of 100 square miles of arable land each year.

In addition, the dangerously low level of fresh water in the rivers, a major source of drinking water in the country, has now been compromised, as the back flow of salt water from the Persian Gulf is seeping into the rivers, rendering them unsafe for consumption and irrigation.

Turkey plans to construct 22 more dams on both rivers, after which the situation downstream will only worsen. It is estimated that the new dams on the Tigris will reduce the water flowing from that river into Iraq by more than 50 percent.

Facing the same water problems as its Arab compatriots in the Levant, Egypt and Sudan are now struggling with how to confront the threats to their well-being that will result from Ethiopia’s new dam project—the largest on the African continent. Egyptians depend on the Nile for 97 percent of their water and it is estimated that they will lose about 20 percent of their water supply to the Greater Ethiopian Renaissance Dam. Sudan estimates that the dam will decrease their supply by almost 50 percent. With water already a scarce commodity and with both countries confronted by climate-change-induced desertification, their rapidly growing populations and struggling economies will soon face monumental challenges and growing unrest.

For its part, Israel has long been diverting the waters from the Sea of Galilee to support its agriculture and population. In the 1950s, the Eisenhower administration not only objected to Israel’s unilateral actions, warning that it was increasing tensions with Syria and Jordan; it also took the step of suspending US aid. Israel, however, did not relent. Some analysts see Israel’s water diversion schemes as a precipitating factor leading to 1967’s Arab-Israeli War.

That year, Israel overran the West Bank, seizing all of Mandatory Palestine and the Golan Heights, and intensified its exploitation of the waters of the sea, the Jordan River, and the waters of the West Bank’s aquifers. Today, Israelis drain more than 80 percent of the West Bank’s aquifers, and their diversion of Galilee and the Jordan River’s waters has resulted in shrinking that historic river to 5 percent of its original volume. To add insult to injury, Palestinians and Jordanians are now forced to buy water from Israel at inflated prices.

All of these situations pose real threats to human life, because of the poverty and dislocation they create and the danger they pose to greater conflict. Moreover, each could be resolved through negotiations. For decades, Syria and Iraq have sought compromise with the Turks. Egypt and Sudan have appealed to Ethiopia to, at a minimum, stretch out the time for the filling of its dam to 10 to 15 years, so that they may make needed adjustments downstream. And water was one of the “final status issues” that Israel agreed at Oslo they would refrain from impacting through unilateral actions.

But Turkey, Ethiopia, and Israel have pursued their own agendas and refused to act in a manner that would promote regional cooperation and stability. For millennia, the Tigris, Euphrates, Nile, and Jordan rivers fed civilizations that flourished along their banks. Now, the selfish actions of a few states are serving instead to threaten the lives of others and fuel conflict.