The Mystery of the Chinese Bi Stones: Nephrite, Nephilim, Nephthys and the Sirius Star System 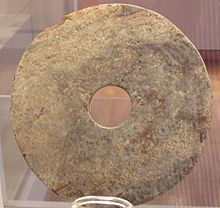 The Mystery of the Chinese Bi Stones: Nephrite, Nephilim, Nephthys and the Sirius Star System

"...for if we are to investigate the extraterrestrial issue with honesty and unhampered by fear…

“…for if we are to investigate the extraterrestrial issue with honesty and unhampered by fear of ridicule, then the possibility of contact in our distant past is a viable option.” – Robert Bauval

” There were Nephilim in the Earth in those days; and also after that, when the sons of God came in unto the daughters of men, and they bare children to them, the same became mighty men…” Genesis 6:4

I remember when I was a classroom teacher who taught history, I would often say to my class when discussing lets say the ancient Egyptians, or Inca that “the reason they say that aliens contributed to these civilizations, as well as others is because they were blinded by racism.” I would tell my students that “certain people could not conceive how people of color could build these amazing civilizations, so they discredit them by saying it was aliens who did it.” In fact I recently heard the very respected Neil deGrasse Tyson repeat this same line of argument as well. I have to say I no longer believe those words anymore, nor the rigged line of argument that could be rather entrapping, and close minded if you think about it. Especially in an era of afro-futurism that has no limit, or bounds when it comes to free thought. I also personally believe an intelligent man like Tyson was being coy when he made that statement, but that’s only my opinion. I feel as though if people around the world who may have been visited by a superior alien “race” than those people would be rather lucky because they were in fact chosen in a way. Also I further believe that if this alien race of higher intelligent beings actually mated with humans and formed hybrids as some alternative writers believe, or if they left valuable technology and knowledge for humans to later build their civilizations on, this could be viewed as a good thing in the course of human evolution and development. In fact the argument that says this takes away from human accomplishments could instead be viewed as a biologically collective accomplishment of two “species” building on those foundations left behind by others, or even an accomplishment of an entirely new hybrid species that may in fact still share a kinship and bond with those distant travelers. This would of course change our understanding of human evolution, but history is written to be rewritten some would say….READ FULL ARTICLE HERE… (strangerhistory.com)

Published in Opinion and World News