The Waiting Is The Hardest Part

Ol’ Tom Petty sure got that right: the waiting is the hardest part. The lines are drawn: vaxed on one side and unvaxxed on the other. Can it be that the unvaxxed know rather specifically what the dangers of the vax actually are? That they are making a rational decision, taking a stand, against a toxic hacking of their immune systems and systemic damage to their organs? It’s not that hard to understand, after all. Those spike proteins can kill you, if not right away, then steadily, steadily over the weeks and months. So, now we’re left to wait as the light wanes and we slide into fretful darkness.

And can it be that that the vaxed are so clue-deprived that they have not seen the news? Sure, information was suppressed pretty tightly for two years since this madness started, but the news media, turns out, is as leaky as the mRNA vaccines. If you were even moderately aware, you could discover that the vaxxes create havoc in your bloodstream. It’s right ‘out there,’ documented and for real. But now, if you vaxed up, and you happened to snag a clue since then, you have a powerful incentive for denying that you might have made a mistake and acquired a serious problem. And you have a support group of about half the nation to reinforce that denial and even demonize those unvaxxed who keep hectoring you with conspiracy theories. Hard to fathom how much you hate them for it.

It looks like all of Hollywood’s zombie dreams will be coming true: civil war between the walking dead and the rest of us, who, let’s face it, cannot be faulted for getting the spooky feeling that we are being hunted down now. It’s kind of serious when you are deprived of your income, and also of access to all the common activities of daily life. Yet just this weekend we see what could be the opening skirmish, the Bull Run, of this new civil war: the “sick-out” of Southwest Airlines pilots and other employees whom the company is attempting to coerce into Vaxxing. These Southwest Airline rebels threw quite a spanner in the works. Will the country even understand what happened? Will other vax-averse cohorts of sore-beset employees at other companies follow? Wait….

Meanwhile, we have the arrival on-the-scene of another joker: Merck’s new anti-Covid-19 drug molnupiravir, said to reduce the risk of hospitalization and death from Covid by 50 percent. Merck and its partner, Ridgeback Biotherapeutics, have applied for an emergency use authorization (EUA) from the FDC for this new drug, the same legal loophole that Pfizer and Moderna got for their mRNA vaxxes. “Joe Biden” promised to spend $1.2 billion procuring a big batch of the new drug, so bringing it on must be a done deal.

The catch is, molnupiravir is in the same order of nucleoside analogue drugs as remdesivir, a clinically-proven failure in the treatment of Covid 19. The stuff killed patients left and right. Molnupiravir’s mutagenic mechanism is supposed to mess with the DNA of Covid-19 viruses, incrementally disabling them and killing them off. The trouble is, mutagenic drugs are notorious for broad spectrum action, so Molnupiravir might do the same thing to the various cells in your body, too: instant cancer. I guess we’ll have to stand-by and see how that works out. It pays to remember, though, that the EUA didn’t work out so well for the Covid-19 vaccines, did it? The waiting is the hardest part.

Molnupiravir was shoved out onstage after two years of the public health authorities (Drs. Fauci, Collins, et al.) and the corporate news media casting curses on the existing suite of cheap drugs that proved clinically effective in the early treatment of Covid-19, namely ivermectin (a.k.a. “horse paste”), hydroxychloroquine, fluvoxamine, prednisone, etc. If you were paranoid, you might suspect that something was up in this attempt to roadblock cheap, safe, and effective treatments in favor of untested novelties that would just happen to be another multibillion-dollar boon for drug companies. 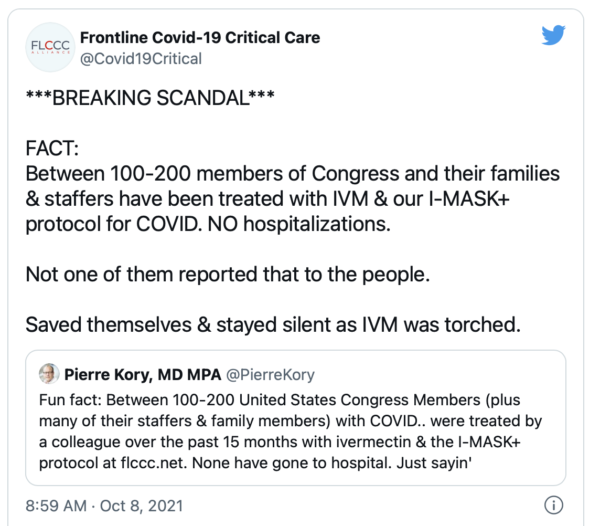 The thundering question, of course, is: who exactly are the authorities behind all this Covid-19 mischief? I’d suggest if you find out who installed “Joe Biden” in the White House, and who is running him, you’d have a few clues. It kind of looks like they intend to kill a lot of people. Pretty soon we’ll have a fair idea of whether it worked or not as the micro blood clots accumulate in 100-million-odd human lab-rats here in America and many more millions around the world.

They’ve also poured enough sand into the engines of the global economy to put it out of business — and, of course, the US economy leads all that. No heat for you this winter as you sit around waiting to clot up and check out. The unvaxxed are watching this go down, goggling in horror at the fantastic credulousness of the doomed Woke, the legions of Zombies who foolishly allied themselves with forces of genuine evil. They’ve been on their knees worshipping Dr. Fauci, the FBI, the CIA, “Joe Biden,” and Rachel Maddow and everybody else brandishing cattle-prods of coercion and propaganda at them. They followed their marching orders obediently, like good little boys and girls, and took their shots. The lines are drawn. Pushing the unvaxxed further will avail nothing (except now maybe a mighty push back). Mulder was right: the truth is out there. Wait for it. (Yes, the waiting is the hardest part.)