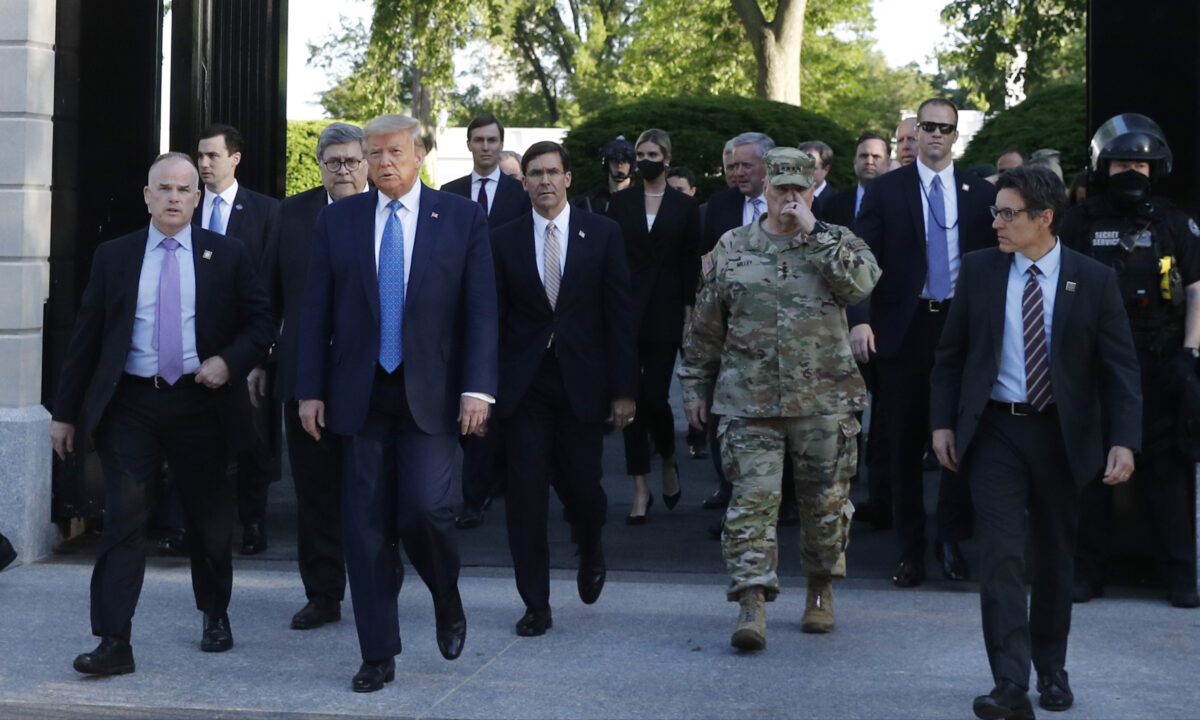 President Donald Trump announced on Monday afternoon that he is deploying military personnel along with other federal assets to stop violent riots in Washington.

“As we speak I am dispatching thousands of heavily armed soldiers, military personnel, and law enforcement officers to stop the rioting, looting, vandalizing, assaults, and wanton destruction of property,” Trump announced during a press conference.

Trump called the violence in the nation’s capital Sunday night a “disgrace.” He said that a 7 p.m. curfew for the city would be “strictly enforced” that evening.

“We must never give in to anger or hatred. If malice or violence reigns, then none of us is free,” he said.

The president also said that he strongly recommended that governors deploy the National Guard in their states.

“Mayors and governors must establish an overwhelming law enforcement presence until the violence has been quelled,” he said. “If a city or a state refuses to take the actions that are necessary to defend the life and property of their residents, then I will deploy the United States military and quickly solve the problem for them.”

Following his national address, Trump visited St. John’s Episcopal Church, a historic and national landmark located across the street from the White House, known as “The Church of the Presidents,” which suffered damage after it was set on fire by rioters Sunday night.

“We have the greatest country in the world,” Trump said as he stood in front of the 204-year-old church. “We’re going to keep it safe.”

White House Press Secretary Kayleigh McEnany said earlier Monday that the White House is establishing a central command center to coordinate with states in response to the mounting violence in the wake of the protests.

“There will be additional federal assets deployed across the nation. There will be a central command center in conjunction with the state and local governments that will include Gen. Milley, Secretary Esper, and AG Barr,” McEnany said.

The death of George Floyd, a black man who died after a Minneapolis police officer knelt on his neck for nearly nine minutes during an arrest last week, has caused national uproar. But the initially peaceful protests, expressing grief and anger over police brutality, have in many cases been marred by looting, violence, and arson.

Protests continued on May 30 in dozens of cities around the nation, including Minneapolis, New York, Atlanta, Detroit, and Louisville, with occasional looting, arson, and vandalizing.

Fires burned in cities across the country—including near the White House—stores were looted, and disturbing footage of violent acts flooded social media, including of a mob beating an elderly female shop owner in Rochester, New York.

According to a count compiled by The Associated Press, at least 4,400 people have been arrested nationwide.

According to a Minneapolis Fire Department report (pdf), Floyd was unresponsive and “pulseless” when he was transported into an ambulance by paramedics from the site of his arrest to the hospital.

The police officer who was seen kneeling on Floyd’s neck, Derek Chauvin, was fired on May 25, along with three other officers. Chauvin was charged with third-degree murder and second-degree manslaughter on May 29.

On Monday, a medical examiner classified Floyd’s death as a homicide, saying his heart stopped as police restrained him and suppressed his neck.

“Decedent experienced a cardiopulmonary arrest while being restrained by law enforcement officer(s),” the report read. Under “other significant conditions” it said Floyd suffered from heart disease and hypertension, and listed fentanyl intoxication and recent methamphetamine use.

Published in Military, Trump and US News