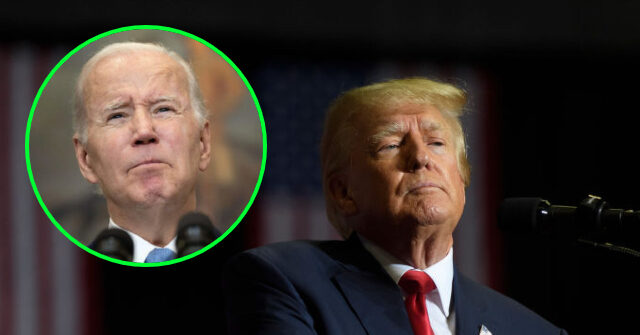 “When is the FBI going to raid the many homes of Joe Biden, perhaps even the White House,” Trump questioned on his Truth Social Monday night, adding, “These documents were definitely not declassified.”

Trump was referring to when his home in Florida, Mar-A-Lago, was raided by FBI agents mid last year. The FBI searched his residence for classified material that the former president could have removed from the White House when he moved out. The search reportedly included agents going through Melania’s bedroom and closets. Following the raid, some of the seized materials the FBI took included over 50 empty folders.

However, the Monday night report from CBS News explained that there had been a U.S. attorney assigned to look over “documents marked classified” that were found at Biden’s vice-presidential office at the Penn Biden Center for Diplomacy and Global Engagement in Washington, which is within close proximity to Capitol Hill:

Attorney General Merrick Garland has assigned the U.S. attorney in Chicago to review documents marked classified that were found at the Penn Biden Center for Diplomacy and Global Engagement in Washington, two sources with knowledge of the inquiry told CBS News. The roughly 10 documents are from President Biden’s vice-presidential office at the center, the sources said. CBS News has learned the FBI is also involved in the U.S. attorney’s inquiry.

The material was identified by personal attorneys for Mr. Biden on Nov. 2, just before the midterm elections, Richard Sauber, special counsel to the president confirmed. The documents were discovered when Mr. Biden’s personal attorneys “were packing files housed in a locked closet to prepare to vacate office space at the Penn Biden Center in Washington, D.C.,” Sauber said in a statement to CBS News. The documents were contained in a folder that was in a box with other unclassified papers, the sources said. The sources revealed neither what the documents contain nor their level of classification. A source familiar told CBS News the documents did not contain nuclear secrets…