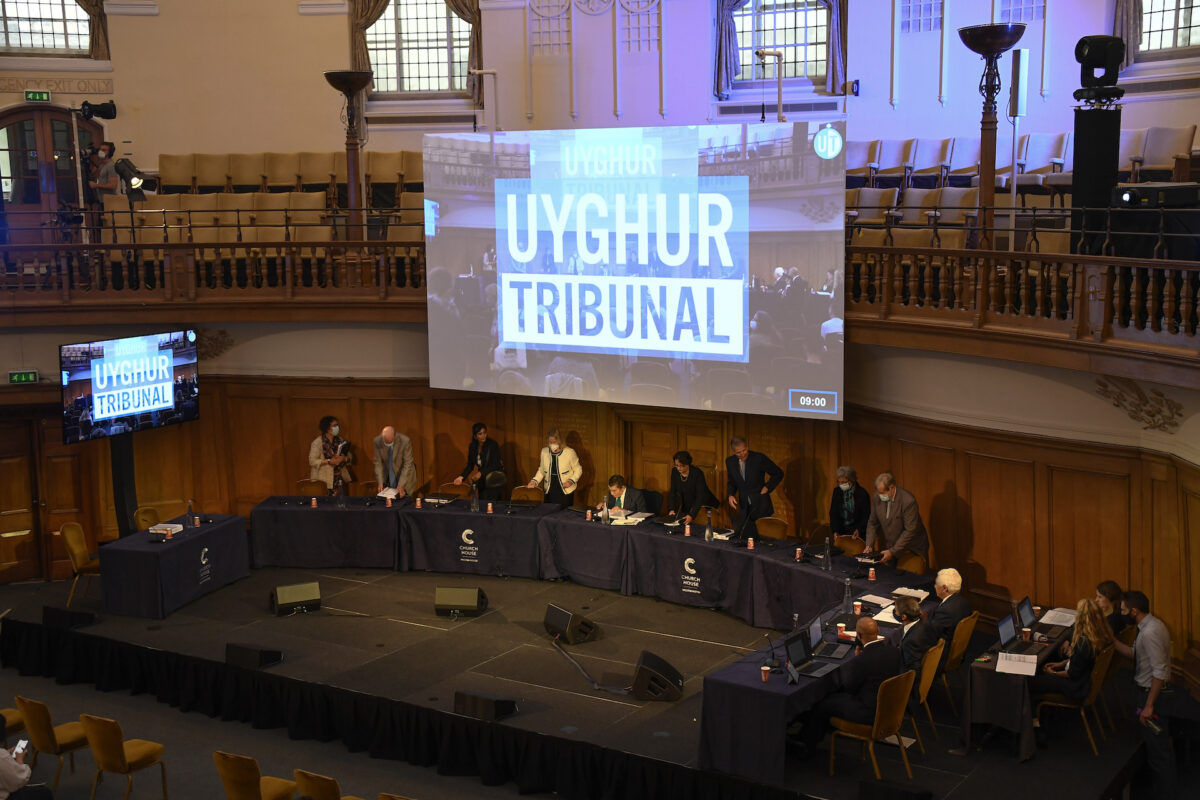 By  THE ASSOCIATED PRESS

LONDON—A “people’s tribunal” set up to assess whether China’s alleged rights abuses against the Uyghur people constitute genocide opened in London on Friday, with witnesses alleging that inmates at detention camps for Uyghurs were routinely humiliated, tortured, and abused.

The tribunal, made up of lawyers, academics, and businesspeople, does not have UK government backing or any powers to sanction or punish China. But organizers hope the process of publicly laying out evidence will compel international action to tackle alleged abuses against the Uyghurs, a largely Muslim ethnic group.

Nice, a British barrister who led the prosecution of ex-Serbian President Slobodan Milosevic and has worked with the International Criminal Court, said the forum would create “a permanent body of evidence and a record, if found, of crimes perpetrated.”

Funded by the World Uyghur Congress and individual donations, the inquiry is modeled on previous “people’s tribunals,” including one organized in the 1960s by philosophers Bertrand Russell and Jean-Paul Sartre to investigate U.S. actions in the Vietnam War.

The London tribunal is the latest attempt to hold China accountable for alleged rights abuses against the Uyghurs and other predominantly Muslim and ethnic Turkic minorities.

An estimated 1 million people or more—most of them Uyghurs—have been confined in re-education camps in China’s western Xinjiang region in recent years, according to researchers. Chinese authorities have been accused of imposing forced labor, systematic forced birth control, and torture, and separating children from incarcerated parents.

In April, Britain’s Parliament—though not the British government—followed legislatures in Belgium, the Netherlands, and Canada in declaring that Beijing’s policies against the Uyghurs amounted to genocide and crimes against humanity. The U.S. government has done the same.

The first witness to testify on Friday, teacher Qelbinur Sidik, said guards routinely humiliated inmates at a camp for men in Xinjiang where she taught Mandarin-language classes in 2016.

“Guards in the camp did not treat the prisoners as human beings. They were treated less than dogs,” she said through an interpreter.

“The things that I have witnessed and experienced, I can’t forget,” she said.

Another witness, Omir Bekali, said he was held in three camps for Uyghur and Kazakh men accused of extremism and terrorism. He said prisoners were held up to 50 per cell, given unknown drugs, and subjected to harsh physical punishment. He said some inmates he knew died under torture.

Tribunal witnesses who spoke to The Associated Press before the hearings include a woman who said she was forced into an abortion at 6 1/2 months pregnant, a former doctor who spoke of draconian birth control policies, and a former detainee who alleged he was “tortured day and night” by Chinese soldiers while he was imprisoned in the remote border region.

Beijing flatly rejects the allegations. Officials have characterized the camps, which they say are now closed, as vocational training centers to teach Chinese language, job skills, and the law to support economic development and combat extremism. China saw a wave of Xinjiang-related terror attacks through 2016.

Nice said China had been asked to participate but its embassy “has neither acknowledged nor replied to letters sent.”

The Chinese Embassy in London did not respond to requests for comment, but officials in China have said the tribunal was set up by “anti-China forces” to spread lies.

Western governments, including Britain’s, have also declined to get involved, Nice said.

The tribunal plans to hold another four days of hearings in September, and hopes to issue its judgment by the end of the year.