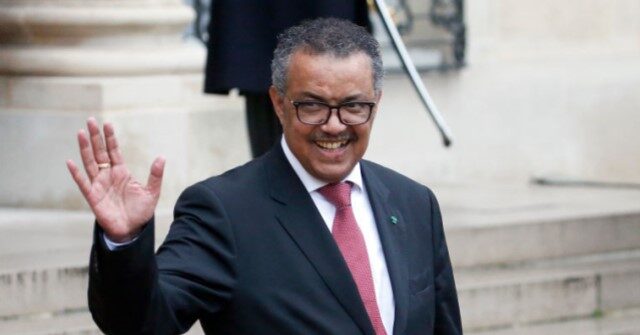 World Health Organization (W.H.O.) Director-General Tedros Adhanom Ghebreyesus took the “unprecedented” measure this weekend of ignoring the agency’s special advisory committee to declare the spread of monkeypox a “public health emergency of international concern” – despite his lack of medical background and his own admission that the risk of it spreading was “moderate” at worst.

Tedros is the first W.H.O. director-general who is not a medical doctor and rose to the position after being accused of helping cover up multiple outbreaks of cholera in his native Ethiopia, where he served as foreign affairs minister and health minister under the now-outlawed Marxist party, the Tigray People’s Liberation Front (TPLF).

As head of the W.H.O., Tedros has faced an array of criticism for not reacting sufficiently quickly to an outbreak of Ebola in Africa under his watch and, more prominently, for failing to declare the spread of Chinese coronavirus a global emergency, and later a pandemic, in a timely manner.

Concerns regarding Tedros’ actions on monkeypox posit the opposite problem – that he overreacted to a situation, even as the medical experts tasked with assessing the risk did not believe it merited the label of public health emergency of international concern (PHEIC).