Video captures pulsating UFO dropping out of the sky 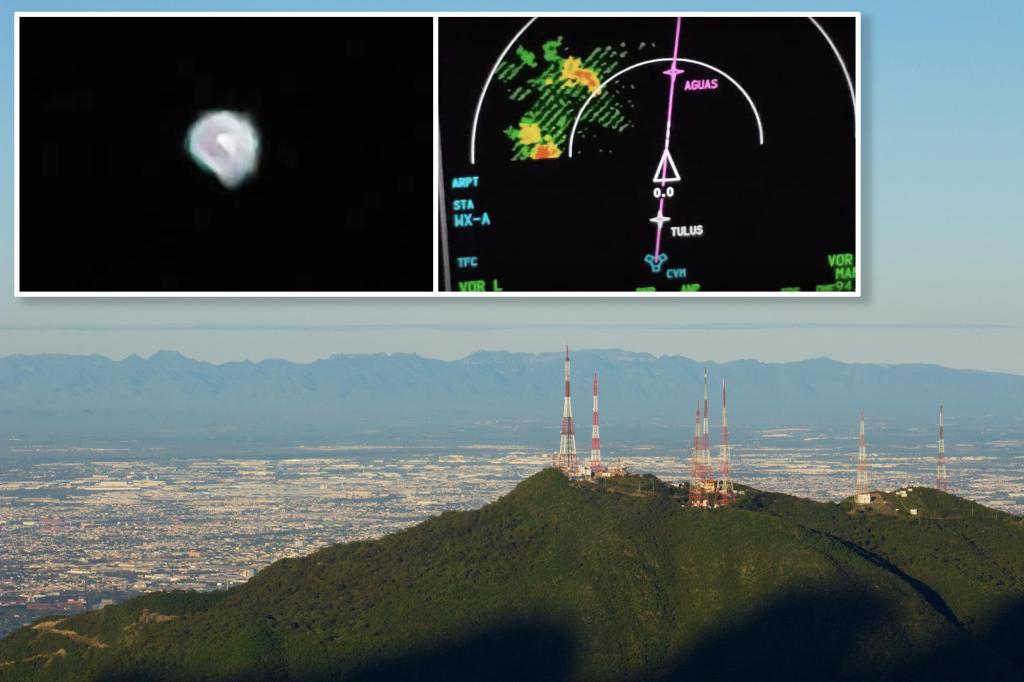 Video captures pulsating UFO dropping out of the sky

Newly released footage of a glowing orb over Mexico has been called “very consistent” with decades of previous reports of unidentified aerial phenomena (UAF) from pilots.

Video obtained by the Daily Mail shows a pulsating, “teardrop-shaped” object zip around a pair of FedEx pilots, who spotted the UFO March 19, 2020, out their windshield while they were flying near Monterrey — though the interloper never popped up on the plane’s radar.

At one point, the “brilliant, yellow-white plasma”-like object appears to rapidly descend from the sky to match the altitude of the two cargo planes, then flash a beam of light in their direction. The orb proceeds to zoom alongside the aircrafts for more than a half-hour before disappearing with a flash of pinkish-purple light.

Footage of the encounter was later analyzed by experts at the National Aviation Reporting Center on Anomalous Phenomena (NARCAP), a nonprofit that studies UFO sightings and works toward developing safety protocols during such rare and inexplicable occurrences.

The pilots have not come forward with their identities, according to the Daily Mail, due to stigma surrounding such controversial events. However, NARCAP Executive Director Ted Roe assured the UK outlet that their account of the floating orb is credible — coming from two career pilots with nearly 30 years of experience combined between the US Air Force and private sectors.

“We have a database going back to 1916. It describes four basic types of UAP encounters and they are balls of light, spheres, cylinders and discs,” he told Daily Mail.

The NARCAP report described the pilots as “competent airmen, highly experienced with observing and identifying aircraft, and are capable of determining normal observations and incidents from unusual ones.”

Their claims were said to be “very consistent with what pilots have been reporting for over 100 years.”

Flying a Boeing 767, the first officer “believed that it was a meteor and began to say so when it suddenly stopped near the same altitude as their aircraft.” Then the UFO “projected an illuminating beam of bright, white light on their aircraft, and appeared to take a collision heading,” the report added.

That prompted the men to take “a defensive attitude and [prepare] for evasive control inputs.”

“I thought it was a shooting star, but then it stopped,” a pilot can be heard telling his colleague during the almost five-minute video.

“That is s – – t hot … Oh, man, look at that thing, dude. That is an unidentified flying object, bro, I can finally say I saw one. That is cool,” the captain said.

“You saw it just drop out of the sky and just stop?” he asked his co-pilot.

“Yeah. I thought it was a shooting star and then it stopped,” the first officer replied.

The skeptical airmen did speculate whether the orb could be a weather balloon — a meteorological study device commonly mistaken for alien crafts. “The only weather balloon we have is near [inaudible], it’s 15,000-ft AGL [above ground level]. This thing’s above our altitude,” one said.

“We’re going to lose him in the clouds, son of a b – – – h,” the captain said as they neared the end of their cruise alongside the UFO. “There’s weather about 40 miles off our left wingtip where this thing seems to have disappeared. It didn’t have strobes or beacon or nothing.”

While this particular FedEx route was not identified in official reports, UFO debunker Mick West of Metabunk tied flight FDX82 to the mysterious sighting. West believes it may have been camera trickery caused by Venus’ glow. But the pilots told NARCAP that they saw the orb with their naked eyes.

“I went through the analysis. There was some argument that it could have been an astronomical effect. Venus was quite bright that night,” said NARCAP’s Roe. “But when you take the entire narrative of how they describe it dropped in vertically, stopped at their altitude and then paced their aircraft, that is a very consistent story. We’ve had many of those.”

The morphing “teardrop” shape could be attributed to a plasma exterior, Roe also said, which could help “absorb” radar signal so that it does not reflect on the pilots’ screens.

The use of plasma in aviation isn’t science fiction, as it’s already being studied and used by the US Air Force, including “proof-of-concept” experiments that showed plasma could be used to help wingless aircrafts “self-lift, hover and fly,” according to 2011 research cited by the Daily Mail.

Roe complained that the Federal Aviation Administration is ignoring reports of UFOs from reputable pilots and instead directing them to report the sighting to a “civilian” reporting center — meaning the phenomena is never officially recorded with the FAA.