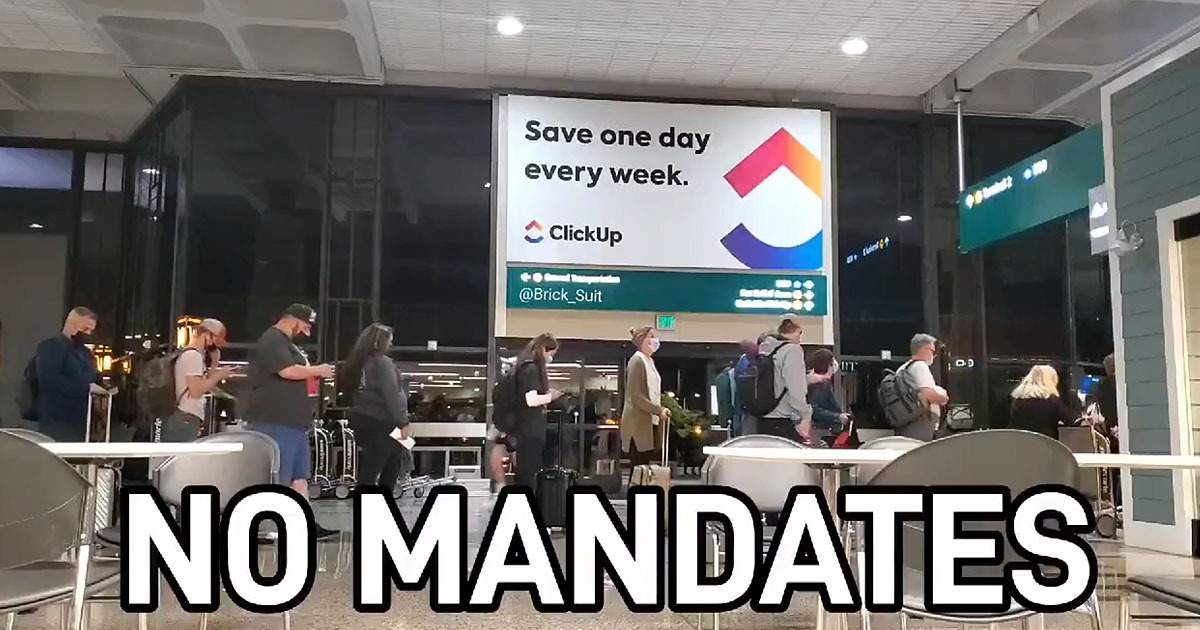 In what appeared to be a prank pulled by an airline passenger opposed to restrictive vaccine mandates, the Southwest Airlines ticket counter at the San Diego Airport called a person named “Noman Dates” (No Mandates) to the counter over the airport gate intercom. Opposition to Southwest Airlines’ vaccine mandates has sparked rumors of a pilots’ strike, though corporate media has rushed to “debunk” such claims.

Passenger “No Mandates” is called to the Southwest Airlines ticket counter at the San Diego airport. pic.twitter.com/1Xk3GnFXLE

Southwest CEO Gary Kelly has embarked on a media tour this Tuesday, appearing on the television program Good Morning America to claim that while he does not support vaccine mandates, he is forced to comply with the Biden regime’s vaccine mandate for companies with over 100 employees:

Kelly appeared on various morning programs this week after Southwest Airlines suffered humiliating canceled flights causing confusion and chaos at airports throughout the country. While the canceled flights were rumored to be caused by a “sick-out” of airline employees protesting the COVID-19 vaccine mandate, Kelly denied this.

However, Kelly acknowledged that the mandate is “controversial” and seemed to suggest the airline would not have such a mandate without the Biden White House’s force.

“The vaccine mandate obviously is controversial and it’s not anything that I wish for our company,” said Kelly. This is a government mandate, it’s a presidential order, and we’re doing our best to comply with that according to the deadlines as they have been set.”

Biden’s vaccine mandate to this point actually consists of press releases and speeches, with no formal mandate being signed into law by the Executive Branch as of this week, as reported by the Federalist.

A letter published by the Wall Street Journal has noted that “The mandate’s nonexistence shields the Biden administration from legal challenges that may ultimately restrict the Occupational Safety and Health Administration’s authority,” and “Yet the mandate is still effective at compelling industries and companies into compliance, as it leaves room for any eventual issuance to target noncompliant entities.”

Published in Coronavirus, Health News, Opinion and US News