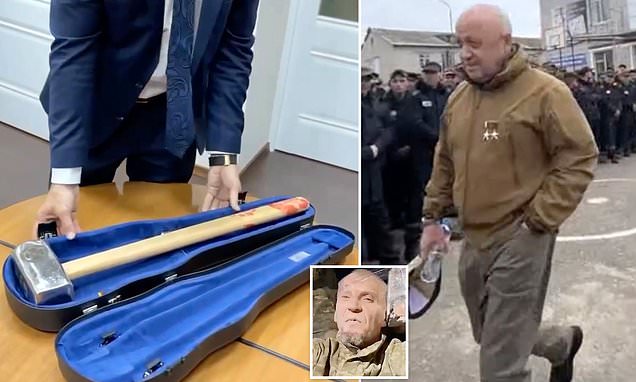 The sledgehammer, pictured, was given by Prigozhin lawyer to a representative of a pro-war channel…

by Will Stewart for MailOnline

The head of Russian private army Wagner has trolled the West showing a bloodied sledgehammer he wants to present to the European Parliament.

Vladimir Putin‘s crony Yevgeny Prigozhin was responding to a vote to declare Russia a ‘state sponsor of terrorism’.

The sick stunt relates to an episode in which a Wagner fighter from Russia was bludgeoned to death with a sledgehammer after defecting to Ukraine, before being exchanged back allegedly at his request.

Yevgeny Nuzhin, 55, was passed by Russian officials to Wagner operatives and a video appeared showing him being sledgehammered to death with a strike to the head.