WATCH: Meteor Rockets to Earth at 32,000 MPH over North Carolina 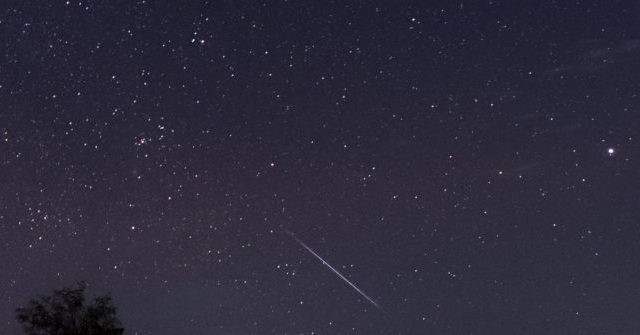 A video shows a fireball raced through the North Carolina sky at 32,000 miles per…

A video shows a fireball raced through the North Carolina sky at 32,000 miles per hour on Friday evening, September 24.

One-hundred-forty-eight eyewitnesses reported seeing the fireball according to the American Meteor Society (AMS). The meteor rampaged through the atmosphere around 7:40 pm eastern time a Facebook post by NASA’s Meteor Watch explained.

The fireball became “visible 48 miles above the ocean off Camp Lejeune, moving northeast at 32,000 miles per hour,” NASA’s post reads. “It disintegrated 28 miles above Morehead City, after traveling 26 miles through Earth’s upper atmosphere.”

Eye witness reports collected by the AMS show that the meteor was seen as far south as Charleston, South Carolina, and as far north Frederick, Maryland.

“It was bright and fast…beautiful!” Chrissy S. wrote in her remarks to the AMS after witnessing the spectacle in Franklin, Virginia.

“3000 hours of flying experience (pilot) so bright I thought it was a firework. Never seen anything like it,” witness Edwin N. from Fayetteville, North Carolina shared with AMS.

Rebekah T. observed the fireball in Boone, NC, and wrote to AMS that “it was amazing and a little scary to see! Never seen anything like it.”

A meteoroid becomes a meteor upon entering Earth’s atmosphere at rapid speed causing the rock to create the flaming spectacle we refer to as shooting stars according to NASA. “Sometimes meteors can even appear brighter than Venus — that’s when we call them ‘fireballs,’” NASA’s website on meteors states. “Scientists estimate that about 48.5 tons (44,000 kilograms) of meteoritic material falls on Earth each day.”