Yosemite’s ‘firefall’ glow lasts only two weeks. Here’s how to see it 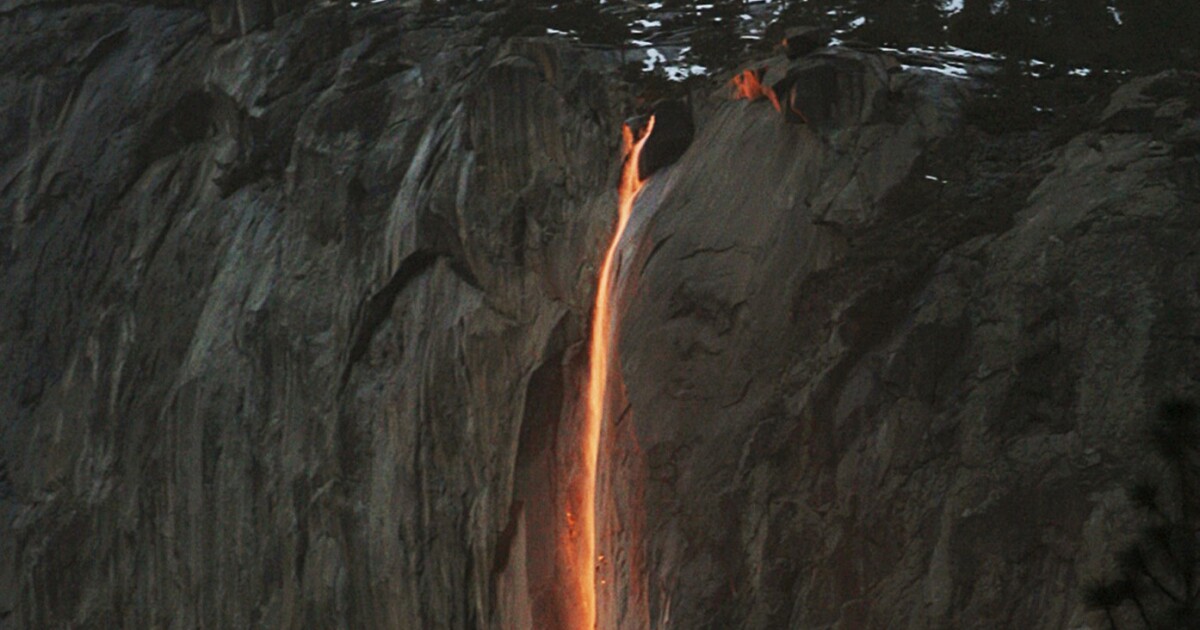 Yosemite's 'firefall' glow lasts only two weeks. Here's how to see it

Sunsets at Yosemite's Horsetail Fall explode with fiery colors in February, if conditions are clear.

Each year, visitors to Yosemite National Park turn out to see a natural phenomenon that lasts just two weeks in February: the winter “firefall.” The waning light of winter days hits a waterfall on El Capitan’s granite walls at just the right angle to create a streak of orange resembling a lava flow. “Just before and after sunset, it’s glowing like it’s on fire,” Yosemite ranger and spokeswoman Jamie Richards says.

The phenomenon became popular in 1973 after National Geographic photographer Galen Rowell snapped a startling image of the glowing light. The firefall name harkens back to an old Yosemite tradition in which park concessionaire employees would tip glowing embers off Glacier Point to create what looked like a man-made “firefall.” That practice ended in 1968, but the name stuck (though the park avoids calling it that).

Horsetail Fall tumbles about 2,000 feet down the eastern side of El Capitan in Yosemite Valley. It’s seasonal, flowing only in winter and early spring. “To see Horsetail Fall glowing blood red is an almost supernatural experience,” according to the Yosemite Firefall website.

Photographer Aaron Meyers has captured stunning images of the waterfall’s glow and has written extensively about the experience on his website. He has calculated optimal viewing dates for 2020 — Feb. 12 through 28 — with the best projected time between 5:28 and 5:40 p.m. on Feb. 22.

Conditions have to be just right to see the glow. Skies must be clear; the slightest haze or passing cloud around sunset time can ruin the effect. “It’s a natural phenomenon and there’s no way to predict what it’s going to be like,” Richards says. Info: Yosemite National Park’s Horsetail Fall page

There’s no single perfect viewing spot to see the light show. No permits or passes are required either. You can stop and set up anywhere between Yosemite Falls and the El Capitan picnic area, depending on what view you want to photograph, according to Richards. Meyers notes the picnic area is one of the most popular viewing locations. (Only disabled drivers are allowed to park there during the February event; all other visitors must park vehicles at Yosemite Falls and walk over.)

Where you choose to stand really depends on when you go during the two-week period. “The sunset starts out on the west side of the rocks during early February and progressively moves east. … If you want to see the falls all lit up in the early firefalls season, go further east. As the sunset moves east you can move east (toward picnic grounds) to get good shots,” Meyers writes online. Info: Aaron Meyers Photography

For anyone angling for a great shot, a good camera and sturdy tripod are a must. Meyers recommends getting to the viewing area early to scope out the area (crowds may start gathering as early as 2 p.m., he says). And he recommends taking some test shots to make sure your settings are correct. Dress warmly, with layers of clothing that should include an outer layer of fleece or puffy down jacket, warm hat and gloves.

Published in Education News, Geographical News and US News