DOUGLAS MURRAY: How did the world lose its marbles? A new dogma has turned beliefs that once seemed common sense into hate crimes. If you say the ‘wrong thing’, you’ll be thrown to the wolves… 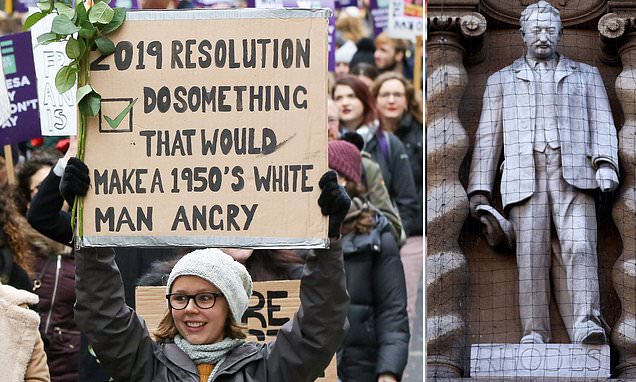 Ideals replaced with dogma that has turned beliefs into crimes

DOUGLAS MURRAY: We are going through a great mass derangement. In public and in private,…

We are going through a great mass derangement. In public and in private, people are behaving in ways that are increasingly irrational, feverish, herd-like and unpleasant. The news is filled with the consequences. Yet while we see the symptoms everywhere, we don’t see the causes.

Various explanations have been given, usually involving Donald Trump, Brexit, or both. But these explanations don’t get to the root cause of what is happening. For beneath all the day-to-day madnesses – over race, sex, sexuality, gender and the rest – are much greater movements and much bigger events. Even the origin of this mass derangement is rarely acknowledged. This is the simple fact that we have been living through a period of more than a quarter of a century in which all our grand narratives about our existence have collapsed.

Religion went first, falling away from the 19th Century onwards. Then, over the past century, the secular hopes held out by all political ideologies followed. In the latter part of the 20th Century, we entered the post-modern era, defined by its suspicion towards grand narratives.