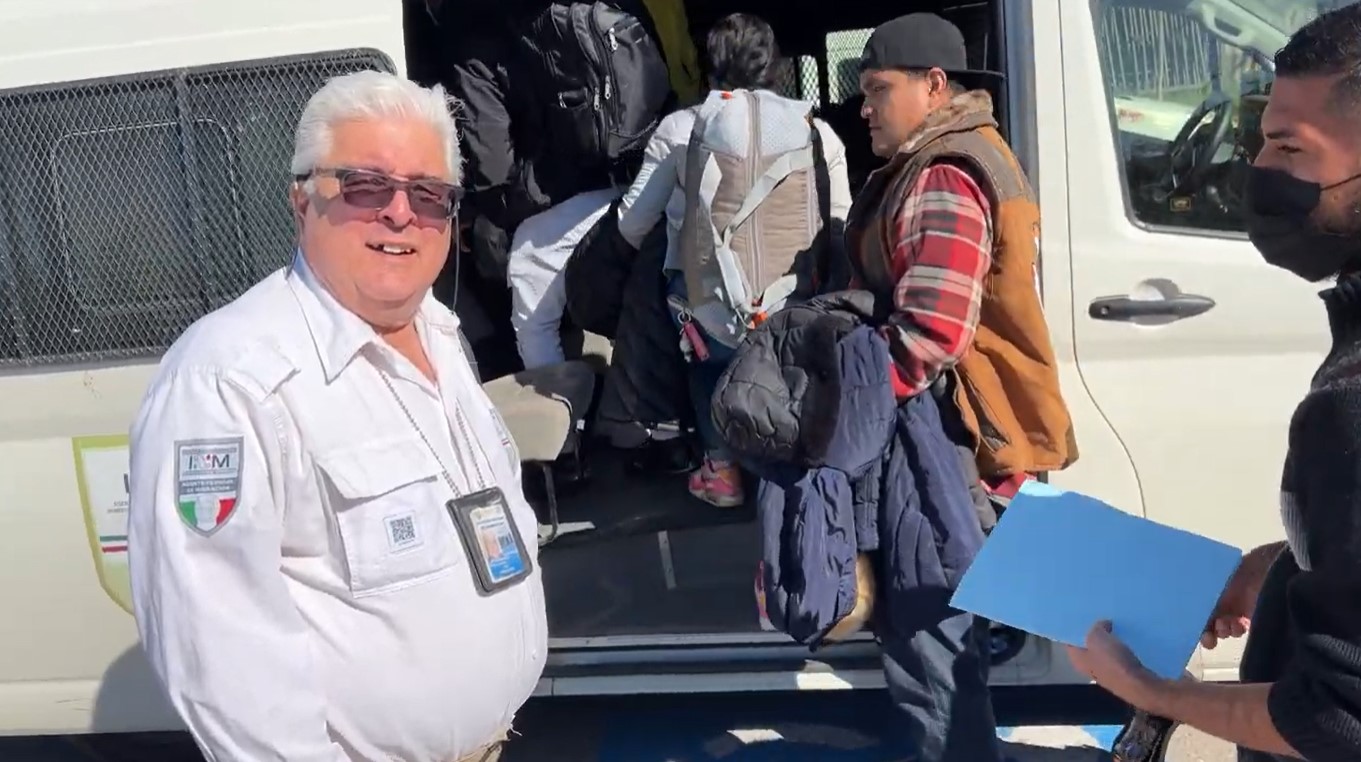 Legalizing Border Crossing for All: The Next Stage of Biden's Migration Crisis

MEXICALI, Mexico – This northern Mexican city across from California is one of the latest to go live with an unreported, legally questionable new immigration strategy that President Joe Biden’s administration has discretely unfurled for months all along the U.S. southern border.

Twice a day, seven days a week since September, Mexicali city officials working closely with Biden’s U.S. Customs and Border Protection, on a secure shared “CBP-ONE” online platform, select hundreds of people a month for their escorted government-to-government handoffs through the land port of entry to Calexico, Calif. Once the Americans check their paperwork, they legally admit intending illegal border crossers like Nicaraguan Maria Esperanza Diaz Ruiz, 42, into the U.S. interior under a questionable authority known as “humanitarian or significant public benefit parole.” 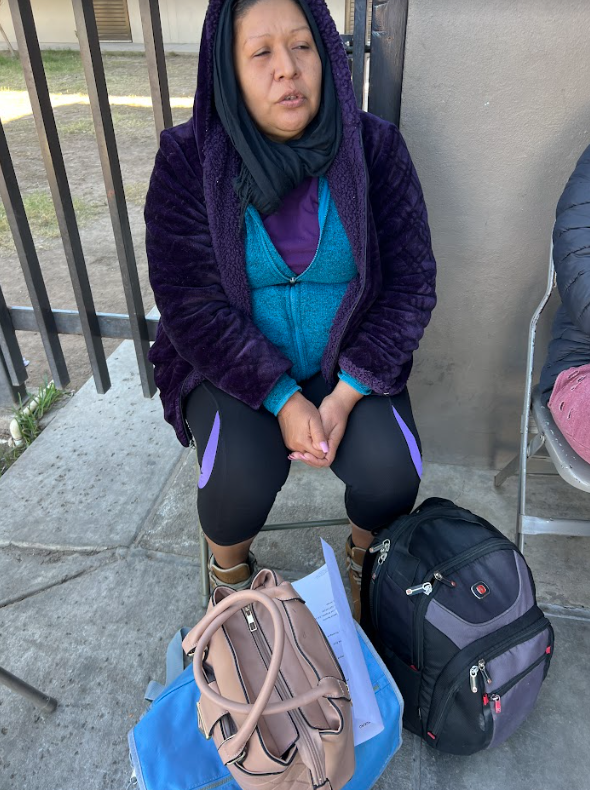 Maria Esperanza Diaz Ruiz of Nicaragua waits at a Mexicali government shelter for imminent transport over the Calexico, Calif., port of entry.

They are free to start new lives under the benefit, with work authorization and the right to apply for asylum part of the package.

As she waited with 25 other selected immigrants for her legal ride to America, Maria told the Center for Immigration Studies (CIS) she’d left home figuring she would have to pay smugglers to cross her over the border illegally. But up-trail word from friends reached her down-trail by cell phone that the Biden administration had legally admitted them and many others from Mexicali under the new humanitarian parole program.

They told Maria, “This is real. This is really a real program. This is not a magic trick,” she told CIS.

Maria came to Mexicali as soon as she could. A local migrant shelter took her in, and while she was fed and housed in relative security, American volunteers, lawyers, and activists helped her collect the documents America required: just the right documented story of woe, a psychologist attesting to suffered traumas and fear of returning home, proof of citizenship and identity, a clear criminal background, need for urgent free American medical treatment, and a sponsor in the U.S. willing to financially support the applicant. The story Maria proffered is that she worked for a government official in Nicaragua whose homosexuality drew death threats from her ex-husband, also a government worker, against her and her boss.

“I had to leave because I would be killed,” she claimed.

On that claimed basis, Maria was now waiting for a Mexican immigration service bus to drive her and 30 others in her group into America, still unable to believe her unlikely good fortune.

Teams of Mexicali city administrators work feverishly to enter each chosen immigrant into the CBP-ONE data portal so the Americans can pre-approve them for handoff at the Calexico border crossing.

After a couple of hours, a Mexican immigration van finally pulled up to the front. A white-uniformed federal officer swung open the van door as the 25 men, women, and children piled in with a few belongings. The bus transported them into a gated section of the port of entry, where they were to be handed over to Americans for processing. CIS was not allowed to follow beyond the gated area. 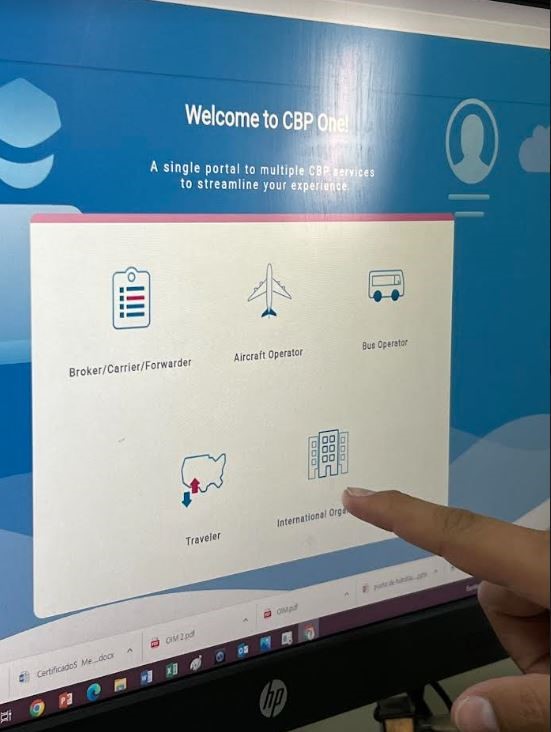 The CBP-ONE data portal provided to city of Mexicali officials for processing immigrants to the Americans.

Indeed, thousands are hearing about this new legal way in – and swamping an expanding system of Mexican shelters that gradually feed their occupants through American ports of entry with temporary legal status and opportunity to make the big move permanent. Local authorities are working to expand shelter facilities and establish new ones to accommodate the soaring demand for the legalized crossings, two shelter managers in Mexicali and one in Tijuana told CIS.

Mexicali city officials recently granted CIS rare, unfettered access to their side of the legalized border-crossing operation that began in September with President Biden’s Department of Homeland Security. Construction on a significant building expansion was underway on acreage behind it.

The Mexicali operation mirrors others just like it that began funneling increasing numbers of immigrants claiming tales of woe into the United States through ports of entry from the Pacific Coast to the Gulf of Mexico, the three shelter managers say. Mexico also appears to have set up operations well south of the American border, in Cancun on Mexico’s southern Caribbean coast and in Monterrey farther north, where pre-approved immigrants are flown into American airports.

This looks to be part of a purposeful strategy to create work-arounds to court-ordered expulsion policies but also to reduce politically painful illegal crossing statistics by channeling ever more people through these legalized crossings. While neither DHS nor the White House has publicized this legalized entrance program,DHS Secretary Alejandro Mayorkas has repeatedly telegraphed it in his oft-stated intentions to create “legal pathways” as part of the administration’s overarching “safe, orderly, and humane” vision for southern border immigration.

“Those who attempt to cross the southern border of the United States illegally will be returned. Those who follow the lawful process … will have the opportunity to travel safely to the United States and become eligible to work here,” Mayorkas said October 13 (Minute 22:01 to 22:17) in reference to the June 2022 signing of the Los Angeles Declaration for Migration and Protection at the Summit for the America’s Conference.

Legalizing Border Crossing for All: The Next Stage of Biden’s Migration Crisis (cis.org)

Published in Illegal Immigration, Political News and US News