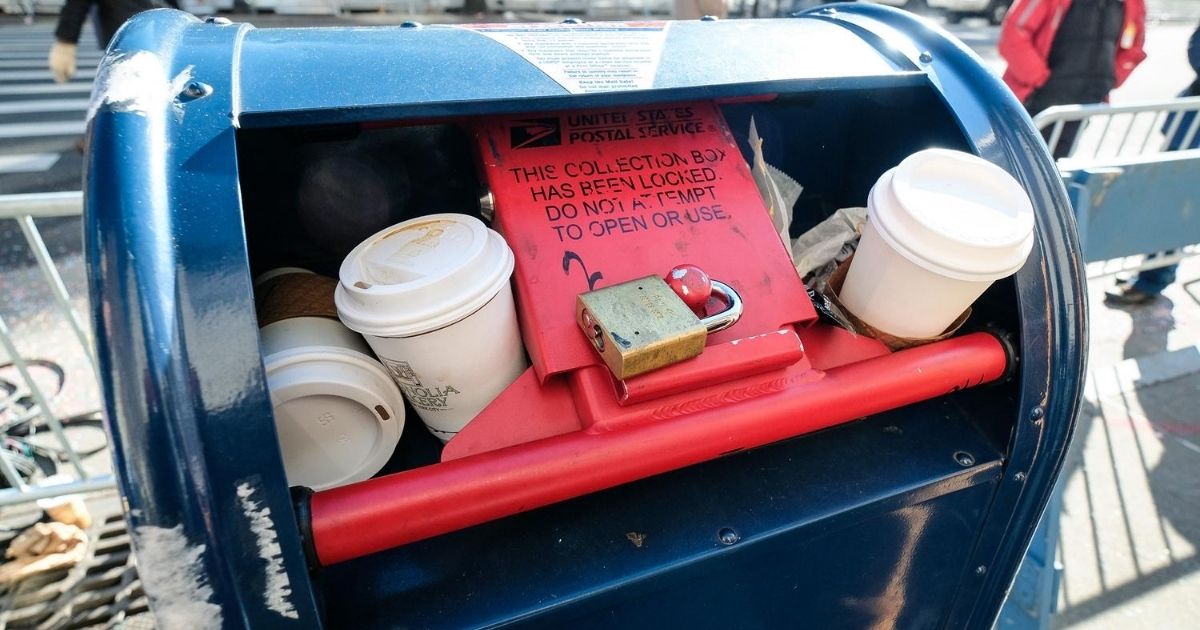 Huge Problem with Lib Conspiracy Exposed: The Mailboxes in That Picture Have Been Locked for Years

Is the GOP trying to steal the 2020 election in deep blue states? One social…

I have to hand it to the left: They’ve managed to come up with a more outré conspiracy theory than Russian collusion, just in time for 2020.

This time, President Donald Trump is trying to steal the election with the aid of the United States Postal Service by locking or taking mailboxes around the nation to prevent national mail-in voting.

There are a number of reasons this theory is pretty silly. To start with, if you’re going to lock mailboxes to influence elections on the federal level in any way, why would you do it in Burbank, California?

Rex Chapman clearly didn’t think about this before he tweeted. The former NBA player has since become a social media influencer best known for his catchphrase, “dogs bruh.”

In your entire life have you ever seen a LOCKED mailbox at the USPS?

Where are you @senatemajldr ? pic.twitter.com/YcbVUTnv37

Chapman played his basketball at Kentucky and has deep roots in the state, which is perhaps why he thinks the person he should be tagging is Senate Majority Leader Mitch McConnell, a Kentucky Republican.

Perhaps he could have tagged the Los Angeles Daily News, a publication that would have explained the phenomenon to him.

“On a recent Sunday night, Mike Bloodworth spotted something fishy going on. It looked like someone was going fishing, but there was no stream or pond nearby,” a 2016 story began.

“Bloodworth suspected the person was about to break into the big blue mailbox across the street from his Van Nuys home. So he turned his lights on and the person hustled off.”

As it turns out, this is a popular thing to do in California’s San Fernando Valley these days: going fishing in USPS collection boxes in order to steal stuff. It’s something Bloodworth’s seen more than a few times.

“In the last couple of days I’ve noticed people fishing in the mailbox trying to pull mail out,” he told the Daily News.

“I’ve seen it happen three other times before. It’s usually three or four in the morning. People come up to the box and loiter and then stick the fishing tool in.”

That’s why you see these locks in California and you’ve been seeing them for years — something I’m surprised Chapman, who pleaded guilty to theft in 2015 after a series of incidents in an Arizona Apple Store, didn’t quite get.

“We do this where we have had incidents, or there is a problem where the box may be out in a not very well lit public place. The boxes have been retrofitted all over Southern California,” said Richard J. Maher, a spokesman for the Postal Service in Los Angeles and Orange counties.

It’s not just Rex Chapman buying into this theory, either. If it were just the “dogs bruh” guy saying that the president has the USPS trying to take or lock mailboxes to prevent universal mail-in voting, this wouldn’t be news. Alas, this conspiracy theory was floated by none other than the nominee for president in the Democratic Party, Joe Biden.

Joe Biden tonight on reports of mailbox removals: "I wonder if you're outside trying to hold down your mailboxes. They’re going around literally with tractor trailers picking up mailboxes. You oughta go online and check out what they're doing in Oregon. I mean, it's bizarre!"

Again: Joe Biden probably could have checked this theory for himself by testing it against reality. Why would Republicans be using the USPS to take collection boxes in Oregon, a state where they have no chance of winning?

The same thing could be said for the three electoral votes in Washington, D.C., which goes so reliably Democratic even George McGovern, one of the most far-left candidates the party has ever run, took it back in 1972.

So now they are not hauling them off, just locking them up. This one is in DC. pic.twitter.com/LQWzuM4tQm

Not only was this stupid, it was also wrong: The mailbox was in Seattle’s Capitol Hill neighborhood.

If you’ve paid attention to the news these past few weeks, you’d probably be aware that’s the home to CHAZ/CHOP and other sundry protests.

Meanwhile, Democratic Maryland Rep. Kweisi Mfume said that the USPS was “hijacking mailboxes off of every corner they can find” in Baltimore, according to WJZ-TV.

You may notice something about all of these locations, which is that none of them would have substantively affected Republican hopes in the fall. That should have alerted them to the fact this was a bogus theory.

There’s a much more rational explanation for this: The Postal Service has been locking boxes in areas where they might be tampered with or subject to theft, and they’ve been taking them from locations where the amount of mail doesn’t justify their existence.

This was happening under the Obama administration. And they’ve stopped the process during the election.

However, when you hear about conspiracy theories and the election, you almost exclusively hear about Republicans — and all the while, you have Joe Biden talking about “tractor-trailers picking up mailboxes” in states Trump can’t win. Liberal media, bruh.