Report: 3,462 Nigerian Christians ‘Hacked to Death’ by Jihadists in 200 Days 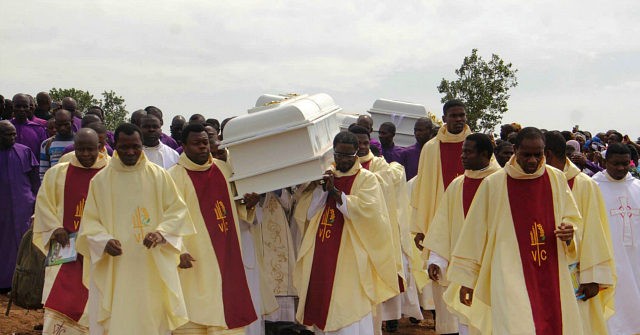 3,462 Nigerian Christians ‘Hacked to Death’ by Jihadists in 200 Days

At least 3,462 Christians were murdered by Islamists in Nigeria during the first 200 days…

At least 3,462 Christians were murdered by Islamists in Nigeria during the first 200 days of 2021, while some 3,000 Christians — many of them girls and young women — were kidnapped in the same period, Crux reported Thursday.

Crux cites a dire report from the Nigeria-based International Society for Civil Liberties and Rule of Law, which tallied the anti-Christian violence in the country from January 1 to July 18, 2021.

The report places the “number of defenseless Christians hacked to death by Nigeria’s Islamic Jihadists and their collaborators in the security forces in the past 200 days” at 3,462, which is just 68 deaths shy of the total number of murders of Nigerian Christians in 2020, according to Open Doors’ 2021 World Watch List.

In its breakdown of the Christian deaths, the report notes that “the Jihadist Fulani Herdsmen are responsible for majority of the killings with at least 1,909 Christian deaths in 200 days, followed by Boko Haram, ISWAP and Muslim Fulani Bandits who jointly killed 1,063 Christians.”

For its part, the Nigerian Army, joined by the Nigeria Police Force and other branches of the Armed Forces, “accounted for 490 Christian deaths,” the report states.

During the first 200 days of 2021, some 300 Christian churches in Nigeria were attacked, destroyed, or burned down, the report notes, and at least ten priests or pastors have been “abducted or killed by the jihadists.”

The report also asserts that “those responsible for the anti-Christian butcheries in the country have continued to evade justice and remained unchecked, untracked, uninvestigated and untried; leading to impunity and repeat-atrocities.”

“In the North, the jihadists operate freely under the cover and protection of the security forces,” it declares, “abducting, killing, looting, destroying or burning and forcefully converting their captive and unprotected Christians and their homes and sacred places of worship and learning.”

As Breitbart News has reported, the West remains largely ignorant of the extent and brutality of the anti-Christian atrocities perpetrated on a daily basis in Nigeria, in large part because of a conspicuous lack of news coverage by mainstream media.

Nigerian Bishop Moses Chikwe and his driver, who were abducted by gunmen on December 27, were released by their kidnappers late Friday, church officials report. https://t.co/0kb4qcEYVP

In 2019, the Vatican Secretary of State, Cardinal Pietro Parolin, underscored the “appalling number of innocent persons that suffer persecution because of their beliefs, including many Christians,” while noting that these violations “often occur with impunity and at times receiving little, if any, attention in the media.”

The sad fact is that the story of Muslims killing Christians does not play to the political agenda that many mainstream media would like to advance. Christians in America are often seen as an obstacle to the “progress” desired by liberals, who have no wish to publicize the sufferings of Christians abroad.

Anti-Christian bias has been rightly called “the last acceptable prejudice,” one that few condemn or even recognize.

“No one much cares about offending Christians,” wrote the coalition of African-American pastors in a 2019 essay. “In fact, mocking, belittling, and blaspheming Christianity is becoming a bit of a trend in our culture. Anti-Christian bigotry truly is the last acceptable prejudice.”

“The hypocrisy on display is astounding,” the pastors continued. “Christianity is the dominant religion of our country. It is the foundation of our government and morality. And yet, Christians are treated as fair game for mockery and insult.”