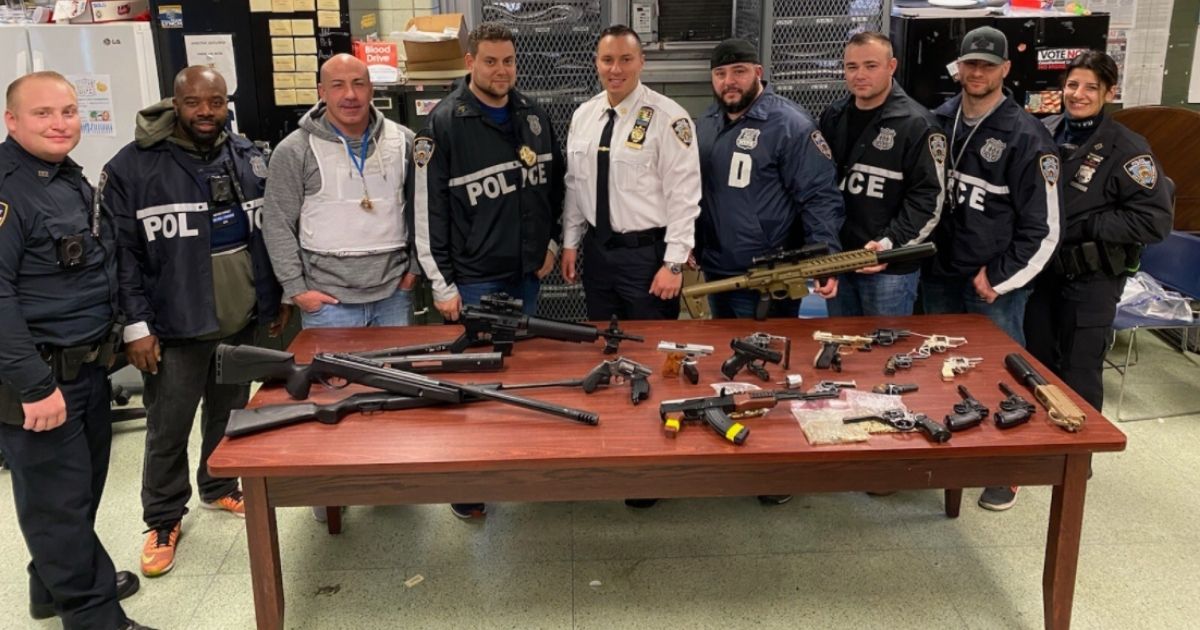 Elizaveta Zlatkis was charged after police said they found 22 guns in her home. The…

Any connoisseur of local TV news is familiar with the guns-on-the-table shot.

Whenever the police bust a gun-running operation, there they are: Posing in front of a table, all of the firearms on full display. It helps if you can put some ammo or narcotics next to them. It really helps if there’s some gun that’s wildly illegal — say, an Uzi — in the cache.

Don’t get me wrong — I’m not against this kind of thing. The police are entitled to flex, after all. Plus, if this is the 11 o’clock news, the footage usually comes on at about 11:17. The alternative generally is some fear-mongering story about how your next drink of water may be your last.

I don’t know if the men and women of the New York Police Department’s 112th Precinct managed to get on the news with this haul of weapons from last December, although they certainly made sure everyone on Twitter saw it:

The 22 weapons you see in the Twitter picture belonged to Elizaveta Zlatkis, 31; police say they found them by acting on a tip. She’s facing a 25-year prison sentence if convicted.

There’s only one problem with this case: Basically, none of the weapons were real.

According to the Forest Hills Post, Zlatkis’ house in Forest Hills, a neighborhood in Queens, was raided at 6 a.m. on Dec. 27, 2019, with two young children in the home.

At the time, Zlatkis was charged with four counts of criminal possession of a weapon, eight counts of violating local law, and one count of acting injuriously to a child under 17.

According to multiple reports, only one of the guns wasn’t fake. But it was missing the trigger, hand grip and internal mechanisms necessary for it to operate, the Queens Daily Eagle reported.

The rest of the guns were toy replicas, airsoft guns and starter pistols, the Eagle reported.

I’m not saying the police didn’t know this at the time, although one might raise questions about law enforcement officers posing around a table filled with starter guns and airsoft rifles.

As of Thursday, the tweet remained up, and it remains unclear when police realized they didn’t have a single working gun.

“Firearms were recovered on Friday, December 27, 2019, in regard to a search warrant and deemed inoperable at a later date,” Detective Denise Moroney, an NYPD spokeswoman, told the Eagle.

But charges are still pending, because Queens District Attorney Melinda Katz isn’t the common-sense type. It’s good to see she’s hard at work faking at keeping the people of Queens safe by protecting them from fake guns.

For her part, Zlatkis won’t accept a plea bargain. Zlatkis and her husband, Elvis Selimi, would lend the fake guns for use as props in music videos, she said.

“We do videos with them as props,” rapper Crucial told the Eagle. “I didn’t know you could actually get in trouble with all that. That’s wild. They’re fake.”

Joe Murray, her attorney and a former Queens district attorney candidate, has vowed to “clear her name.”

“Not a single gun was real,” Murray said.

He noted that, despite the seriousness of the charges, the judge released Zlatkis on her own recognizance after she spent one night in jail. This, again, doesn’t speak to law enforcement viewing these “guns” as much of a threat at the time of her arrest.

“I want to clear her name. She’s not a gangster,” Murray said.

In the meantime, the charges have wreaked havoc on Zlatkis’ life, with her arrest being at the top of Google searches of her name and Facebook acquaintances sharing the story. She says she turned down an initial job offer after realizing an intensive background check would be required.

For now, given the renewed attention the case is receiving, the Queens District Attorney’s Office is being circumspect about the case.

“We do not comment on pending cases,” spokeswoman Kim Livingston told Patch.

If you want a comment on the matter, though, the tweet showing the “weapons” is still up.

Published in Crime and Gun Control