VIDEO: Man stabbed at protest against vaccine mandates when brawls break out between Antifa and demonstrators 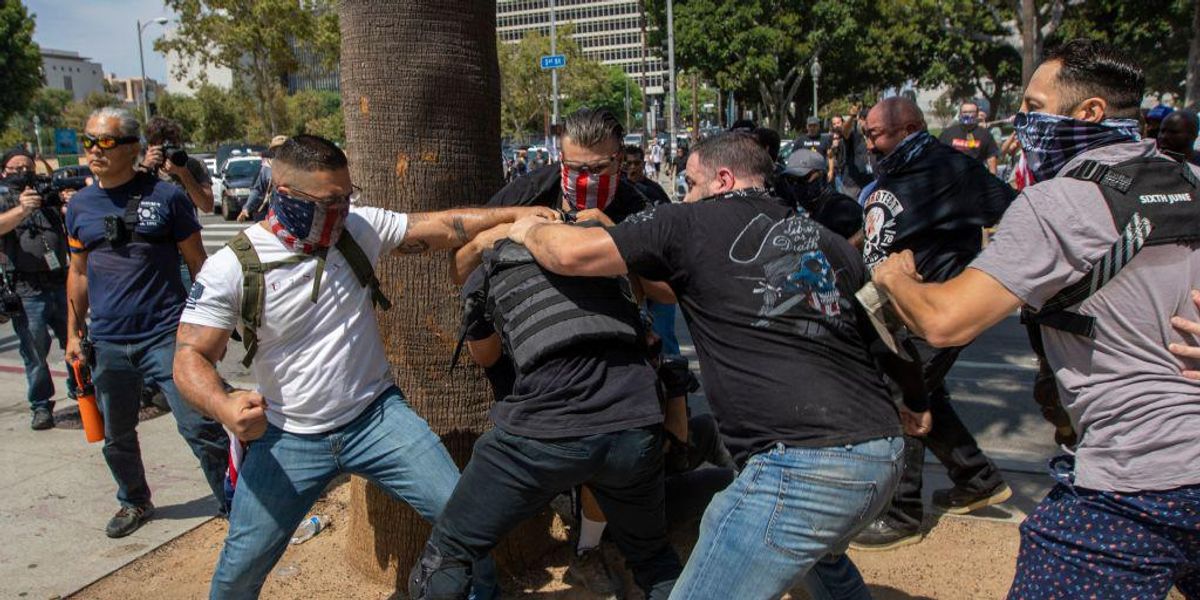 VIDEO: Man stabbed at protest against vaccine mandates when brawls break out between Antifa and demonstrators

A man was stabbed and several all-out brawls erupted in Los Angeles on Saturday afternoon during a protest against COVID-19 vaccine mandates.

Around 2 p.m., a group of several hundred people gathered near the south lawn of the City Hall in Los Angeles to voice their concerns about coronavirus vaccine mandates. The protesters against vaccine passports were holding signs calling for “medical freedom” and one that read “vaccine mandates are fascist.”

Shortly thereafter, a few dozen counterprotesters showed up, some of which witnesses and police have described as members of “Antifa.”

L.A.-based videographer Sean Beckner-Carmitchel was covering the protest and captured video of when several fights broke out while there were chants of “F*** Antifa!” being yelled. He noted that there were weapons and “lots of bear mace” used during the violent confrontation. Beckner-Carmitchel also said that several press members were injured.

The wild brouhaha left one demonstrator bleeding from the head. One man screamed, “Unmask them!”

Confrontation beginning. One of the anti-maskers, throws a punch towards a counter protestor. Counter protestor knocks him down to the ground. A *lot* of fights, several weapons used. One man stabbed, will follow up on details. pic.twitter.com/ungcdnuatS

One man was stabbed during the chaos. Police were on the crime scene tending to the man who was stabbed, and paramedics arrived to take him to the hospital for medical treatment.

Capt. Stacy Spell, a Los Angeles Police Department spokesman, said, “We are on scene to maintain order after a fight broke out between Antifa and people gathered for the permitted event.”

The stabbing victim was taken to a nearby hospital, where he is in serious condition, LAPD Officer Mike Lopez said.

One man being treated for what I’m hearing is a stabbing – following up later on what happened. pic.twitter.com/dMW3tXTxd9

The Los Angeles Police Department issued a statement on Twitter, which acknowledged a “male that was stabbed” and treated by the Los Angeles Fire Department. LAPD added that no arrests were made, but an “investigation is ongoing.”

LAPD is monitoring a protest at the south lawn of the LA City Hall. We are on scene to maintain order after a fight broke out. We are aware of 1 male that was stabbed & is being treated by LAFD. No arrests have been made but investigation is on going. pic.twitter.com/0UwCgN55mJ

Earlier in the week, a Twitter account associated with Antifa called on members to counter-protest the rally against vaccine mandates, according to Fox News.

“The same group of anti-vaxxers and fascists have been assaulting people at every location they protest from: Cedar Sinai to Harlowe to The Abbey,” the flyer from the SoCal Antifa Twitter account reads. “As a community we say NO MORE! No safe space for fascists!”

Anti-vaxxers have been holding violent protests attacking innocent bystanders in the process.

Now they want to hold a rally downtown, this directly puts the unhoused communities who live in the area in danger. We say no more!

Join us at City Hall, August 14th at 1pm pic.twitter.com/Kvn8YmJgI7

Last weekend, Antifa militants attacked a group of Christians who were participating in a prayer event at a park in Portland, Oregon.