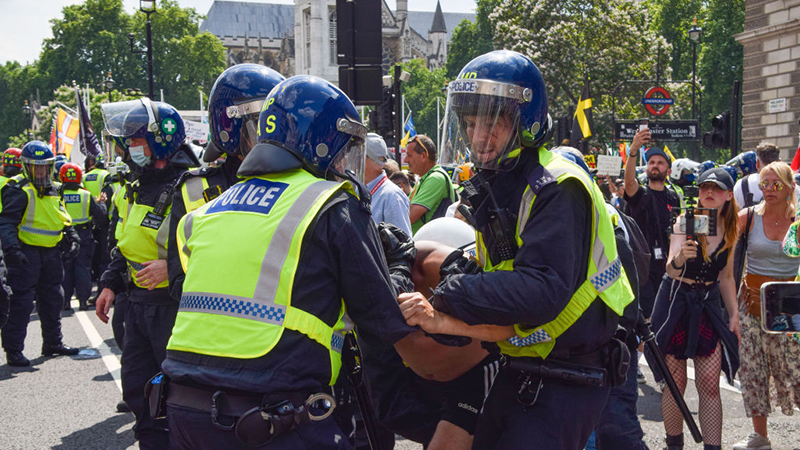 People in London protesting the fact that so called “freedom day” is anything but that, were met with even harsher police responses than during lockdown Monday, with chaotic footage emerging of beatings and arrests.

It didn’t take long for the massive gathering to devolve into this:

A heavy police presence, combined with a sweltering hot day made for the perfect storm:

In total 11 arrests were made, according to reports.

Footage of the protests was even censored from social media, prompting one outlet to suggest that the ‘conspiracy theorists might be right’.

The huge protest came after it was announced, on “freedom day”, that vaccine passports would be mandatory to enter “crowded venues” from the end of September.

In addition, the government indicated that the system would be expanded to apply not only to venues, but in workplaces, including offices.

The London protests follow similar scenes in France and Greece, where the government have announced plans to exclude the unvaccinated from society.

French President Emmanuel Macron has been forced to back down on imposing mandatory vaccine passports for entry to shopping malls after several volatile nationwide protests.

As we previously noted, while the UK government has claimed to have lifted restrictions, the use of masks and social distancing continues, as does government tracking and forced quarantines, along with the aforementioned introduction of vaccine passports.

It’s the complete antithesis of freedom.