Model Blac Chyna Explodes in Miami Airport: ‘Get the F***ing Vaccine, and Stop Being Stupid, Hoe’ 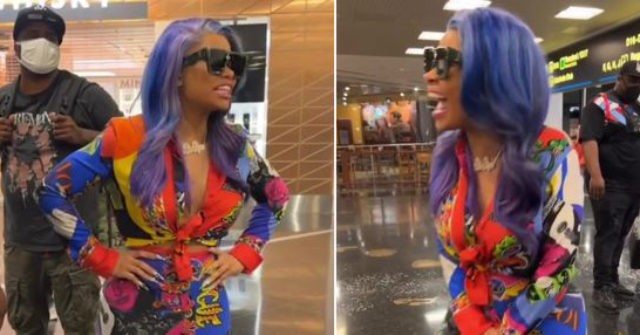 Model Blac Chyna Explodes in Miami Airport: 'Get the F***ing Vaccine, and Stop Being Stupid, Hoe'

Model Blac Chyna was caught on video shouting about getting vaccinated against the coronavirus in a terminal at Miami International Airport on Sunday.

“So go get the fucking vaccine and stop being stupid, hoe,” Blac Chyna — whose real name is Angela Renée White — shouted in an explosive rant that was captured on film at the Miami airport.

The model was screaming at a woman who asked for a photo, according to a report by TMZ.

In the video, Blac Chyna, who was clad in a colorful coat and sunglasses, and sporting blue hair, could be seen shouting while onlookers sat in silence appearing stunned and perplexed.

The model reportedly shouted her sentiment while standing in the terminal with her bodyguards.

According to eyewitnesses who spoke to TMZ, Blac Chyna flipped out and began ranting about vaccines after a woman holding a baby approached her to ask for a photo — at which point the model commented that the woman better be vaccinated.

By the end of her rant, Blac Chyna was no longer talking about vaccines, but rather, was going off about being from Washington, D.C.

Police told TMZ that no calls were made regarding the incident.

In an Instagram Live video earlier this year, Blac Chyna showcased herself getting vaccinated against the Wuhan virus by a health care professional who appeared to administer the vaccine at her house.

“We’re about to right now, literally, show them the needle,” Blac Chyna said in the video while the health professional stood beside her.